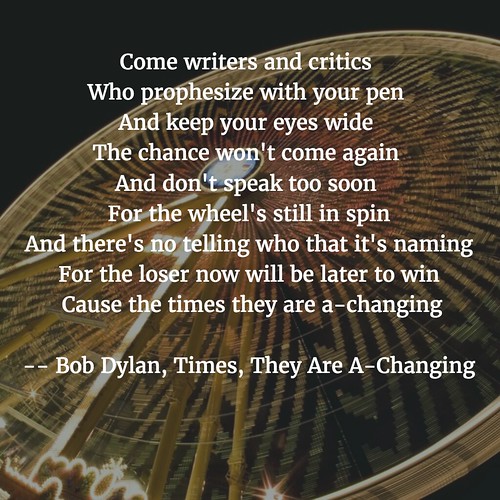 A few weeks ago, my friend Laura put out a call for a project that she was doing that would feature the Bob Dylan song The Times Are a-Changing. When I first taught myself guitar, that was one of the songs I wanted to learn, and did. Laura was hoping to build a musical quilt of songs and voices and words, as part of a public performance.

I grabbed my guitar, re-learned the song a bit, and then choose the verse that I think has the most resonance for the times that we are in right now – the one where Dylan calls out politicians and writers to embrace change for a better world and be ready to defend the choices you make in the moments before you. I recorded the verse and sent it forth to Laura, to use as she saw fit.

A few weeks later, Laura shared out a video of the live performance of her Affirmation Quilt. As I watched and listened via YouTube, I was pleased to hear her cello layered in on top of my guitar and voice. She is a talented musician, and I was honored to hear her strings on top of my ragged singing voice. It was wonderful, particularly as she wove the music in with spoken words contributors by others, and other music pieces, too. She also performed the song, live. That was the quilt affect she was going after.

But this story doesn’t stop there.

Ron, another musician friend from another part of the world, watched Laura’s video, too, and he asked if she could share it on Soundcloud. He wanted a copy of the song. I figured he was up to something, and of course, he was. Ron, a talented keyboardist, took the duet of Laura and I, and made it into a trio (or more) by adding keyboards and other elements in Garageband, and then shared it back out again.

None of us (including Dylan, as far as I know) have ever met in person to jam. We only know each other through our networks, coming together for a shared purpose with shared interests. When collaboration comes together like that, it’s magical and powerful.

Thanks to Maha for sharing this video out long ago (got lost in my draft bin), as a companion piece to my blog post the other month about gender and gaming.

Peace (beyond the blocks),
Kevin 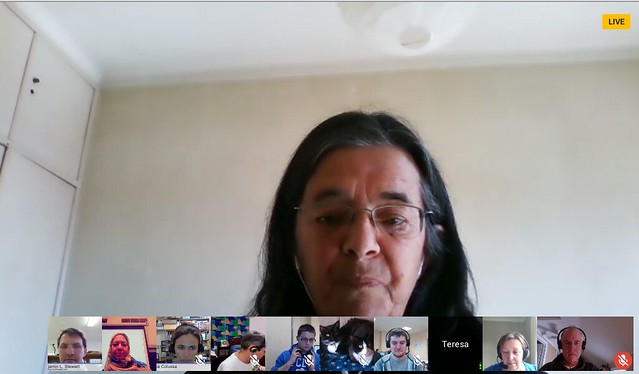 Nothing like some collaborative energy to celebrate a friend, and that’s what Maha, Simon and Susan and I have been up behind the scenes for our friend, Terry, whose birthday is today. We recorded a song, and then some thoughts — all via on online collaborative audio tool called Soundtrap (I’ll share out more about it later).

And here is a bonus that I made for him, too. A comic series about our journey into the rabbit holes of technology.

The other day, I shared out my tribute song to my various communities, in the form of an animated music video of sorts. It is my way of saying thanks to people who inspire me all year in various online homes.

I decided to show a bit of where the song writing came from, and used my comic app to annotate the original piece of paper. My songwriting process is very messy, musically and physically. I am constantly scratching on and scratching out words, drawing lines to show movement of phrases and verse/chorus, and yet, I often take photos of the paper later, to keep a trail of the song. 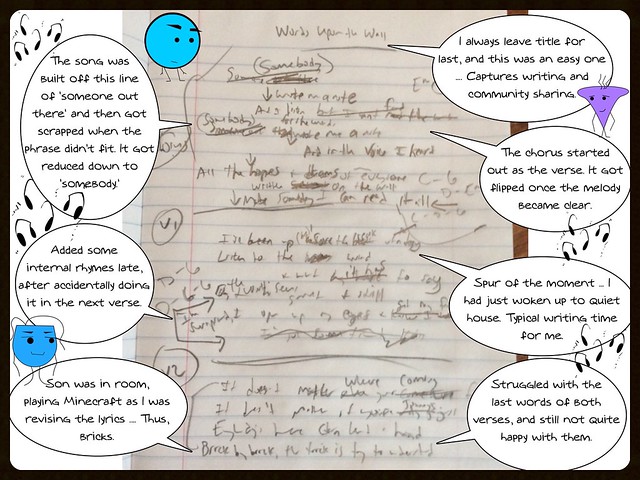 So, if you are interested, I tried to reconstruct the writing of the song with annotated notes before I forget it all (which I am bound to do). Thanks for being part of my network as a visitor here. This song is for you.

Here is the audio-only version, too. Feel free to remix.

Peace (in the script),
Kevin 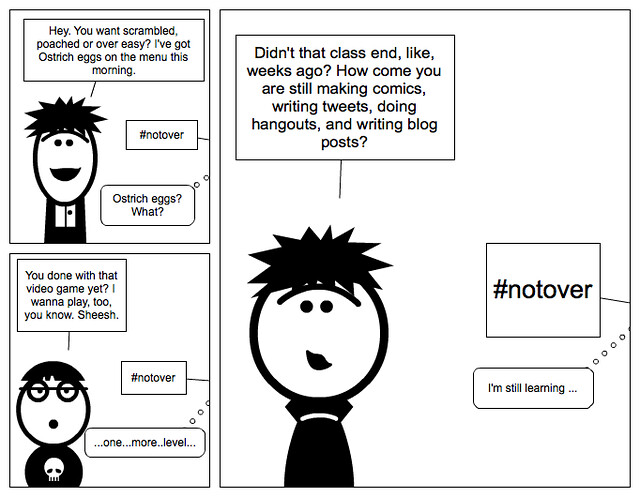 As the last official phase of the Connected Courses comes to an end, there is ample discussion among participants on the question of: Why does a connected community end just because a course ends? (And why does an online course end when a traditional semester ends?) The #notover hashtag is being used, which I used for the comic above.

I’m reminded a bit of another comic I made for Alan Levine earlier in the Connected Courses, as he mulled over this same topic, and I reflected on an LMS I am in right now that I don’t care more than a whit about.  He put forth the idea of “keeping the lights on” and not using language about anything ending. 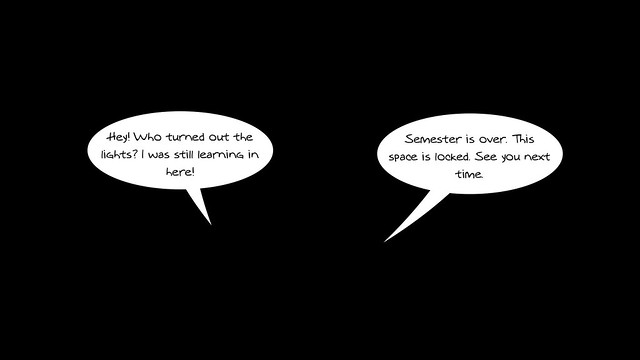 So many folks are plotting ways to keep people connected. There was even talk of a task force. Made a comic. (Surprised? I doubt it). I was thinking of superheroes. Personally, I like the Mad Hacker. 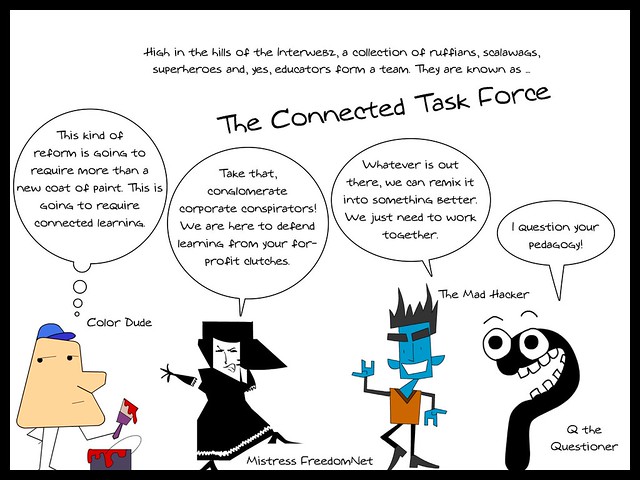 Just like anything of this nature, it will depend on the participants now, not the facilitators (although facilitators should now have permission to become participants) as to whether sharing, connecting and exploring continues under the #ccourses banner.

For my part, I will try to share out on a regular basis ideas from the collaborative Daily Connector site that (digi) Simon, Maha (B.) and Laura and I worked on. I’ve been doing random Daily Connects throughout December (after we originally posted them each day as new ideas back in October), and the ideas there have value beyond Connected Courses, for sure. The random generator is such a cool function of that site. (Thanks, Alan!)

To be honest, the Connected Courses has been intriguing and I have enjoyed the discussions and hangouts and meeting people (I mean, I’ve been “hanging out” in spaces with Howard Rheingold and Mimi Ito and others … how cool is that? It’s a thrill). But as a K-12 teacher, much of the discussion about designing open education courses for the University level has been intriguing on a thinking level, but not all that practical on the day-to-day level.

But you know, I am still in the rather vibrant #rhizo14 network (coming towards #rhizo15), and I connect with DS106 via the Daily Creates (our model for the Daily Connects), and the #clmooc community is still sharing in various spaces. A different, more relaxed energy comes when the planned world falls away, and the unknown maps of what is ahead takes place. Sometimes, it sustains itself. Sometimes, not.

We’ll see where the #ccourses goes and time will tell if it is really #notover … but I do know that the people I have connected with there have greatly expanded my own online networks of friends I can turn to with questions and advice and projects, and ideas. And, of course, comics. I made a ton of comics for Connected Courses, in hopes of infecting a little fun into the conversations.

Peace (may it continue),
Kevin

Before you read this, read this.

Are you back? Did you read it? Man, I love when people like Terry do that … pulling back the curtain on digital composing. As I was reading his piece it occurred to me … we work differently. I was reading as he talked about the lists he makes, the lines he draws out, the resources he has at his finger tips, the thoughtfulness that goes into what he composes (in this case, with Zeega). He’s got a system.

He leads with the brain, and reaches for the heart.

I start at the heart, and aim for the brain.

What I mean is that when I do what Terry explains he is doing (honoring someone’s blog post by remixing it with digital media via Zeega), I dive in and let the muse take me to where it will in a person’s piece. I’m searching for anchor phrases and trying to find the center of the blog post. I hate to admit it — but I don’t think too much about it. I trust my instincts to find where it is I need to go.

Mostly, it works. I think. And Terry’s process? Oh yeah, it works, too. Both of our methods work, and there are probably a myriad of others out there (what’s yours?) but mostly, they seem a mystery to your audience. Doing as Terry has done — showing what he is thinking about as he composes and the tools he is using to compose what he is thinking about — is a valuable analysis, providing insights to the writer.

Here’s a Zeega I did this week in honor of Jim Groom’s fantastic piece about connected learning called Connected by Design. My composing process?

Peace (in decomposing the composition),
Kevin

I had this urge to create this comic as a sort of reflection point, drawing in connections that have me pushing my own ideas about what it means to be a writer in this digital age. Think of it as a token of gratitude for all those who are helping me along on this journey. I created the comic (making up representative characters for my friends: Simon, Terry, Anna, and Maha) in Bitstrips for Schools, and then moved it into a flipbook creator.

Come join me in reflections about a video discussion about the lasting impact of ETMOOC, via Connected Courses. I wasn’t part of ETMOOC, although I think I signed up for it. I followed it from a distance, and yet, it reverberates through many networks that I am in. I’ve put the hangout – with Alec Couros, Mia Zamora, Howard Rheingold and others — into Vialogues. 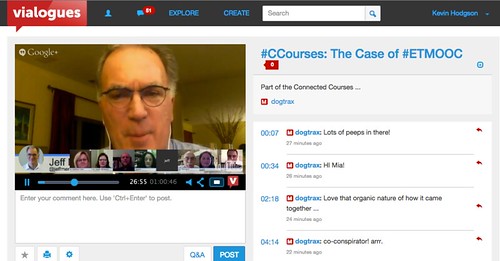 Page 1 of 6123456
Thank you for visiting this online writing home. I am a sixth grade teacher and a teacher-consultant the Western Massachusetts Writing Project. This blog covers a lot of ground -- from teaching, to writing, to music, to art and beyond.