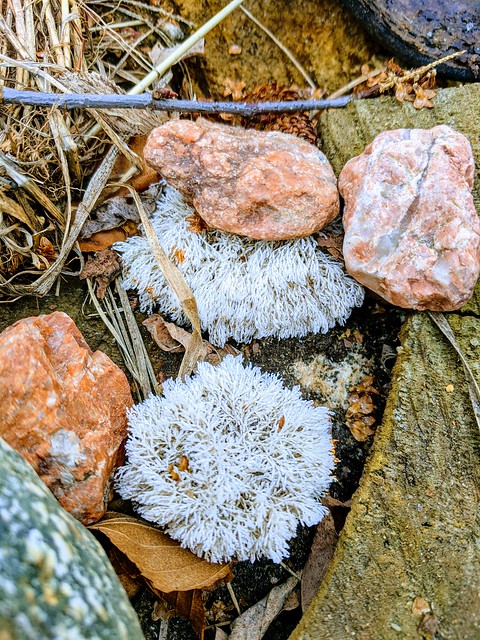 I’ve been writing poems each morning for CLMOOC’s Poetry Port project — in which there are daily poetry themes as well as an invitation to request a free poem to be written (see more). Yesterday, Greg shared both a poem and then his “behind the scenes” of the writing of the poem.

I figured I’d follow Greg’s lead this morning. (The above video was a screencast of me, in the act of writing the poem, via an Etherpad, which keeps a time-slider version of the writing, so you can follow the writing of a piece from the first word, on. I always liked that feature in Etherpad variants.)

Mostly, during the CLMOOC project this month, I’ve been not looking ahead to the daily themes, even though there is a calendar. I like to write poems each morning in a burst of creativity, letting the theme spark the start of something.

This morning, before reading the theme (which was “play”), I was outside, walking the dog, and found myself in a stunned stop at the view of the full moon — known as the Snow Moon — in the sky. It was so beautiful, this orb of light, and its magic hung with me as I sat down with a mug of coffee and the call for a poem.

in another otherwise
quiet morn

The first line, about being a child, imagining the moon as a ball or puck on the field of play came naturally, which then led to small lines about each element. I was seeking a rhythm to the phrasing: verb, article, noun; verb, article, noun. You can almost hear the dribbling of the basketball, the swishing of skates, the whacking of the baseball.

In the second stanza, I knew I wanted to repeat that rhythm, but this time, on the shift to the adult, seeing the moon, not as a something to be played with, but something to be inspired by. It’s still verb, article, noun, but the nouns now are not concrete objects, but feelings. Something more internal.

After setting up those two pieces as mirrors to each other, I wanted to shift the poem into the present, of the moon in the sky, and how its silver light was in contrast to the leafless winter trees, and the sense that the Snow Moon was shouting for attention, even as the dog and I were the only beings in movement, to notice (and the dog didn’t pay attention). The last two lines, dangling nearly on their own, was intentional — a way to settle the reader into the moment.

I did some recursive editing, too, shifting and changing words as I was writing, “playing” the poem in my head, thinking (but not too much) about flow, the way syllables create or distract from the movement of the poem. One sound can throw the whole cadence off track at times. I’m reading as I’m writing — sometimes out loud but often, inside my head, that writer’s voice that only the writer can hear as words hit the page.

The poem’s not perfect, by any stretch, but I think it captures the wonder of the morning, and what more could I ask of a piece of writing? 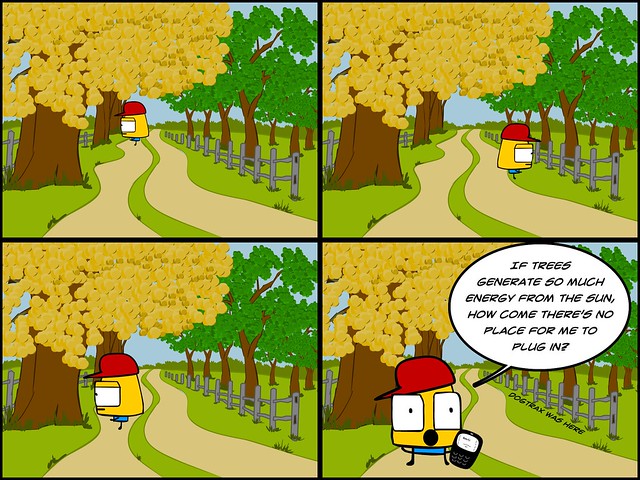 As someone who has followed John Spencer for a few years, I have enjoyed the ways he explains innovation, design, teaching and learning. His latest book — Vintage Innovation (Leveraging Retro Tools and Classic Ideas to Create Meaningful Learning) — revisits some of his previous ideas around project-based learning and design cycles, but he looks at it through the idea of student inquiry dependent less on technology and new-fangled digital tools, and more on duct tape, cardboard and deep thinking. His aim, or my take-away, is to remember that technology may be flashy and the “thing” in the moment — maybe something to hook the interest of our students — but in looking to what’s new, let’s not forget what has worked, and to revisit those “vintage” concepts in the age of the new.

The book explores concepts of integrating more divergent thinking that opens up wonder (as opposed to convergent thinking, which narrows the focus); encouraging students to be local historians and local journalists in their own communities through writing, interviews and publishing; tapping the power of imagination to think through and grapple difficult problems; reaching for the duct tape and cardboard before the laptop and phone; and more. John peppers the pages with his own illustrations, his own stories and his own sense of writing self, which is curious, compassionate and quite lighthearted and funny at times.

Three concepts really stood out for me after reading Vintage Innovation.

The first idea stems from the chapter in which John reminds us that nature and the outdoors provides plenty of ways to think about design (bio-mimicry), to inspire writing, to consider projects to help the larger world, and to use the quiet long walks or getting lost in the wild to mull over problems and solutions, all on their own time. (As a facilitator of the Write Out project, this entire chapter of his is right up our alley.)

Second, John spends a solid chapter reminding us that the teaching of Philosophy soft skills is as important, if not more so, than many of the harder skills of the STEM framework — that the philosophical underpinning of students thinking about problems, and devising solutions, can guide student innovators into ethical and important decisions about which path to take, and it is that point in which technology and other things may be tools for design. (If only Zuckerberg and company had done more of this …)

The final take-away for me is his powerful message that, at the end of the day, teachers are the most important player in helping our students grapple with modern day problems, not screens; that the ability to challenge critical thinking is something that can create magic in the classroom, beyond anything a website or app can do; and that the tools for innovation are easy found, and require neither elaborate MakerSpaces, 3D printers or any of the other expensive hardware that technology companies pitch our way. 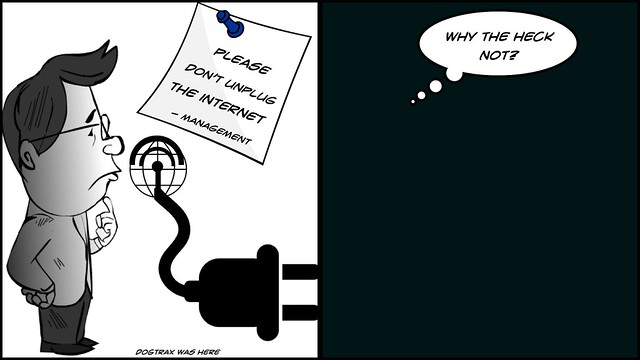 Kevin’s Note: I signed up for a month-long Digital Detox project out of Middlebury College and enjoyed the email updates throughout January that got us thinking about our digital lives, and offer small steps and actions to take. I made comics about the concepts as a way to read deeper and think a little more critically about the ways digital devices and platforms are part of our lives.

I was following the Democratic election news out of Iowa about the first caucus, thinking about where we are as a country and where we might be heading (although, who can say with any certainty?) and this song began to write itself. Sometimes, writing is like that. So I spent some time with it, sitting with the words and the chords, scribbling in and scribbling out ideas, and letting it flow forth onto the page, and then into the microphone.

As usual, the notebook page is a mess of ideas. 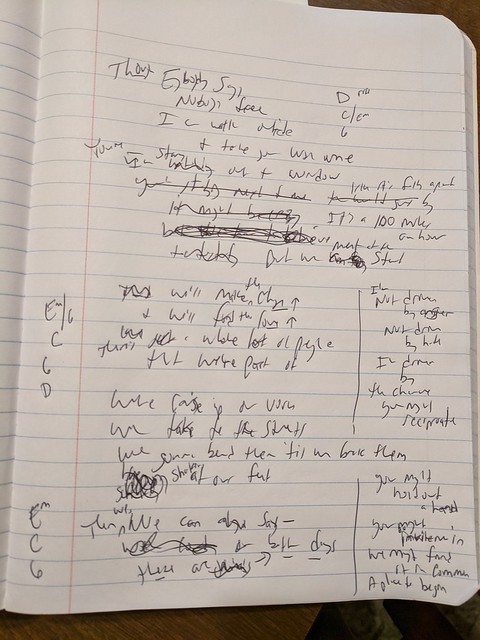 It began as a song of resistance and defiance in this age of Trump and the GOP’s control of government – the title of Bend ‘Em ‘Til You Break ‘Em gives it away — but something arced for me about halfway through, and the third and fourth stanzas are more hopeful, more optimistic, more reasoned.

Take a listen to the demo: 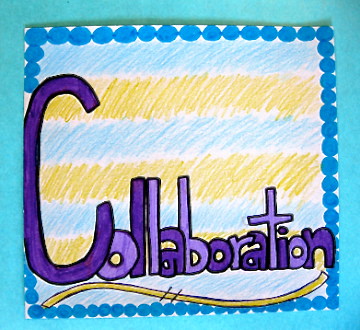 (Note: this poem is for the CLMOOC February poetry writing. Today’s theme is collaboration. I had the first lines of this poem in my mind yesterday, and then later, I started a piece of music that I hope represents the idea of collaborative instrument voices, weaving together. The rest of the poem came from writing the song)

We are not
disparate parts

empty hooks
inside the heart;

The song, collides;
the map, it charts

the place I end is
the place you start

Peace (in together),
Kevin 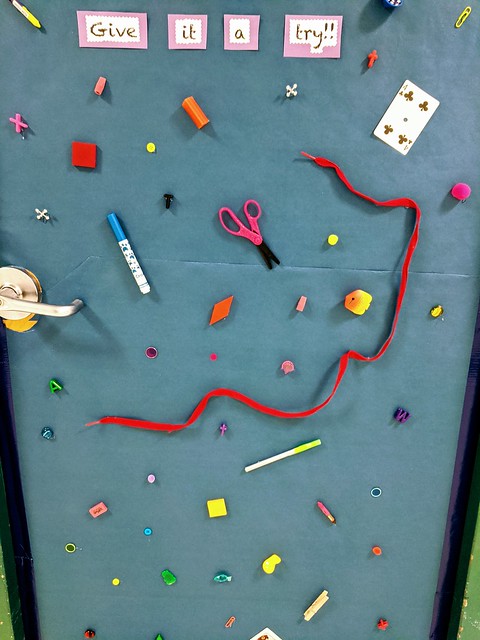 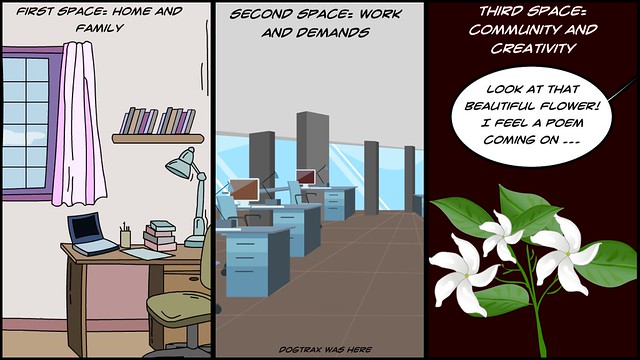 Kevin’s Note: I signed up for a month-long Digital Detox project out of Middlebury College and have enjoyed the email updates that get us thinking about our digital lives, and offer small steps and actions to take. I’ve also been making comics about the concepts as a way to read deeper and think a little more critically about the ways digital devices and platforms are part of our lives.