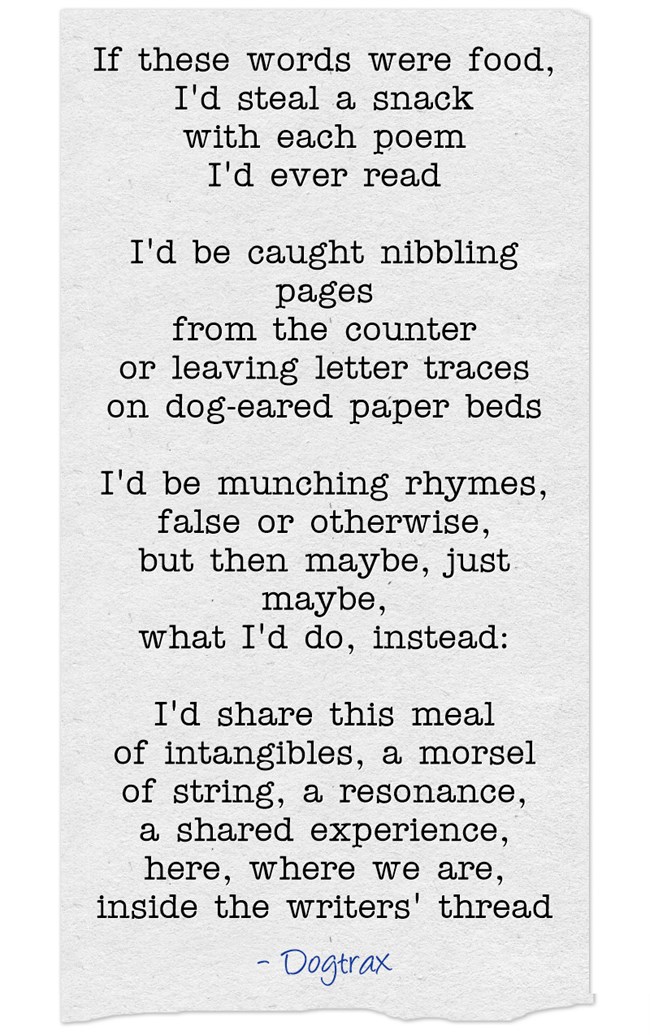 I’ve been writing poems every day this month with multitudes of teachers and writers in the VerseLove community, and on this last day, with a prompt about poets looking at themselves and celebrating the writers they are, I came up with this final poem for April, a celebration in words of the VerseLove comment threads of poetry reading and support.

Peace (chewing on it),
Kevin

This was my morning poem for VerseLove, with the prompt by Glenda about What a Poem Can Do, which I then turned a bit into What a Poem Might Be … I took my text poem and made it into a video poem via Lumen. 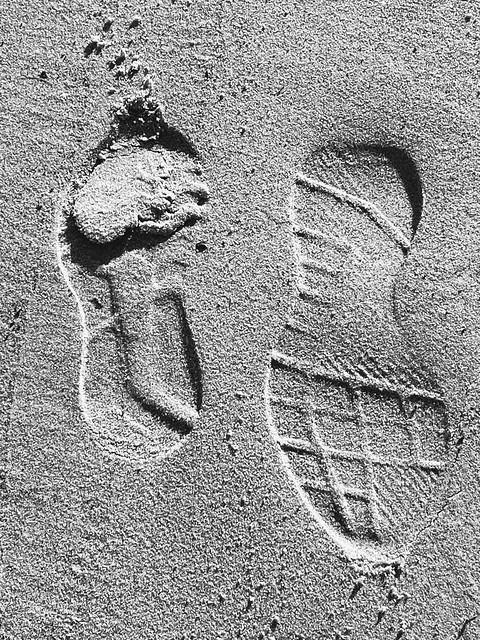 Peace (in the sand),
Kevin 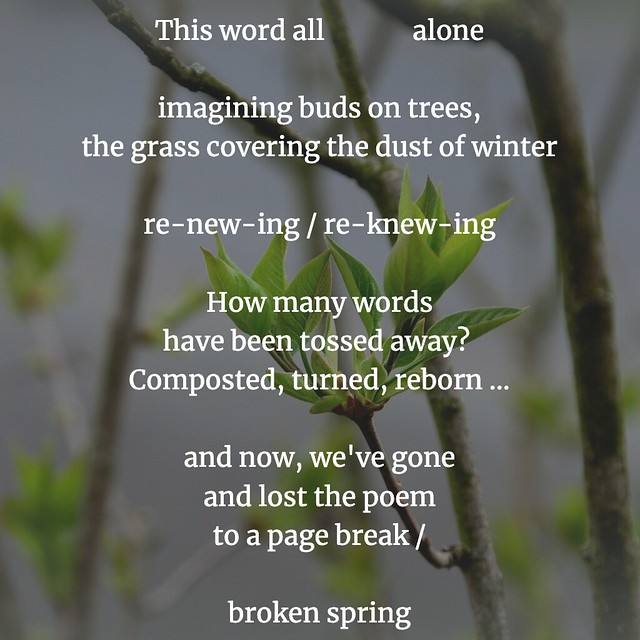 Over at VerseLove, today’s prompt is about using annotation of texts to discover a Found Poem, and I decided to venture into an ee cummings poem. First, I randomly chose one of his poems, coming upon one about spring.

As I read, I annotated off to the side, thinking of words, lines, and theme. Then I noticed the poem spilled over to another page, which I didn’t have in front of me, which seems like an appropriate way to end my annotation, and craft a poem. 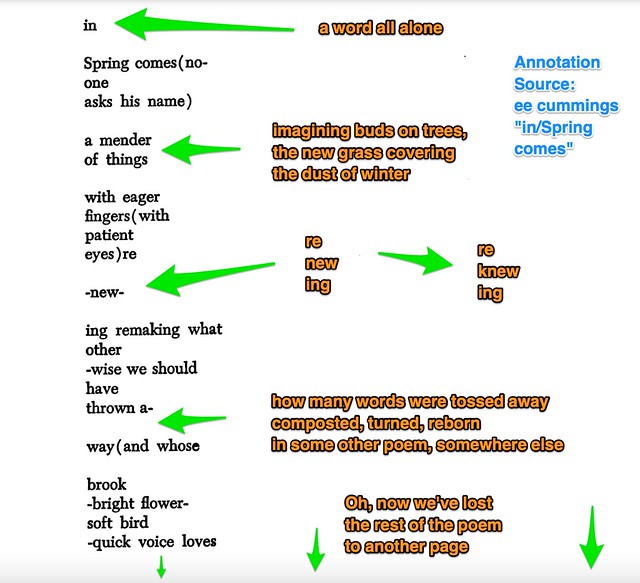 I tinkered a bit with some of the words from my annotations, but mostly, I kept it intact, moving from an observation of a single word to discovering the last section of the poem is lost (to me, in the moment).

Peace (in the margins),
Kevin

This is something a bit different for me. I signed up to become one of many folks passing along lines of a poem throughout April. Thanks, Margaret, for allowing me to step into this massive poetic collaboration. (Here is a full list of all blogger/poets who are contributing to the effort).

I’ve been loosely keeping tabs on the growing poem, which early emerged as something built by contributions of quotes from different novels and books, allowing another layer of poetry/writing/curation on top of a collaboration. When I read Robyn’s addition yesterday (“Mud and dusk, nettles and sky – time to cycle home in the dark”), I sat and thought for a bit, and wondered how would I take that idea of a path home a little bit farther?

In my mind, I found myself with an image of Milo, from The Phantom Tollbooth, and then, I came across what I think is a beautiful one-liner that takes the Progressive Poem a little farther down its path.

See my addition at the end of the ongoing poem …

THE POEM (so far)

Where they were going, there were no maps.

Sorry! I don’t want any adventures, thank you. Not today.

We have to go back. I forgot something.

But it’s spring, and the world is puddle-wonderful,

so we’ll whistle and dance and set off on our way.

Come with me, and you’ll be in a land of pure imagination.

Wherever you go, take your hopes, pack your dreams, and never forget –

it is on our journeys that discoveries are made.

And then it was time for singing.

Can you sing with all the voices of the mountain, paint with all the colors of the wind, freewheeling through an endless diamond sky?

Suddenly, they stopped and realized they weren’t the only ones singing.

Listen, a chattering of monkeys! Let’s smell the dawn
and taste the moonlight, we’ll watch it all spread out before us.

The moon is slicing through the sky. We whisper to the tree,
tap on the trunk, imagine it feeling our sound.

Clouds of blue-winged swallows, rain from up the mountains,

Green growing all around, and the cool splash of the fountain.

If you look the right way, you can see that the whole world is a garden,

a bright, secret, quiet place, and rather sad;
and they stepped out into the middle of it.

Their minds’ libraries and lightning bugs led them on.

The darkwood sings, the elderhist blooms, the sky lightens; listen and you will find your way home.

The night sky would soon be painted, stars gleaming overhead, a beautiful wild curtain closing on the day.

Mud and dusk, nettles and sky – time to cycle home in the dark.

(mine): There are no wrong roads to anywhere

(Note: I borrowed this list from Robyn, who wrote the line before me and added my reference to it). Here is a list of the sources for lines:

1. The Imaginaries: Little Scraps of Larger Stories, by Emily Winfield Martin
2. The Hobbit, by J. R. R. Tolkien
3. The Wind in the Willows, by Kenneth Grahame
4. Walk Two Moons by Sharon Creech
5. inspired by “[in Just-]” by E. E. Cummings
6. “Pure Imagination” from Willy Wonka and the Chocolate Factory
7. Maybe by Kobi Yamada
8. Sarah, Plain, and Tall by Patricia MacLachlan
9. inspired by Disney songs “A Whole New World” from Aladdin and “Colors of the Wind” from Pocahontas
10. The Other Way to Listen by Byrd Baylor
11. adapted from Cinnamon by Neil Gaiman
12. adapted from The Magical Imperfect by Chris Baron
13. adapted from On the Same Day in March by Marilyn Singer
14. adapted from a line in Bridge to Terabithia by Katherine Paterson
15. The Secret Garden by Frances Hodgson Burnett
16. Prince Caspian by CS Lewis
17. The Last Cuentista by Donna Barba Higuera
18. Kate DiCamillo’s The Beatryce Prophecy
19. The Keeper of Wild Words by Brooke Smith
20. Last Child in the Woods by Richard Louv
21. The Phantom Tollbooth by Norton Juster

And now, the poem moves to … Margaret Simon (who started me off on this whole thing).

Peace (in the gathering),
Kevin 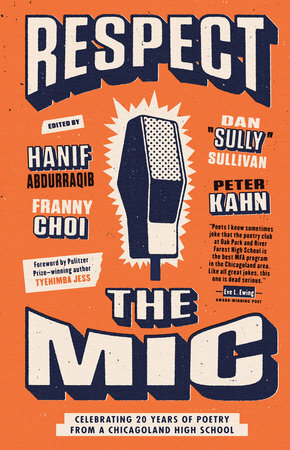 How cool is it that Hanif Abdurraqib (one of my favorite cultural critics, writer, podcaster) is helping to promote young people’s spoken poetry out of Chicago with this new collection: Respect The Mic (Celebrating 20 Years of Poetry From a Chicagoland High School)?

Pretty cool, and Abdurraqib, along with a handful of others (Franny Choi, Peter Kahn, Dan Sullivan) provide the textual introduction to the many poems shared here from Spoken Word Clubs in two Chicago high schools. The result is a gathering of powerful youthful poetic voices, along with small biographical snapshots of where the young poets are now (in college, or at work, or with family).

The themes of these poems run the gamut from family life in urban center, to friendships (strong and frayed), to survival in difficult conditions, to social unrest and social justice. These poets all have something to say.

Peter Kahn is one of the main teachers with the Spoken Word Club, and his story of finding a root with spoken poetry (which he also explains in the book) is a spark of inspiration for other educators. Notice how students led the way with their passions and interest.

I’ll admit, though: reading poems in the book that are meant to be performed live can be a bit strange, as the reader yearns to hear the pauses, the inflection points, the rising and lowering of cadence in the lines, the emphasis on this word over that, this phrase over that, the presence of the poet standing in the center of the stanzas. (See some videos from the Spoken Word Club)

Overall, a celebration of young poets is worth celebrating, and Respect The Mic does just that — it brings Chicago slam poetry onto the stage, and their words sing off the pages. (Note: the book provides a helpful link to information and resources about Spoken Poetry: https://spokenword.oprfhs.org/ ) 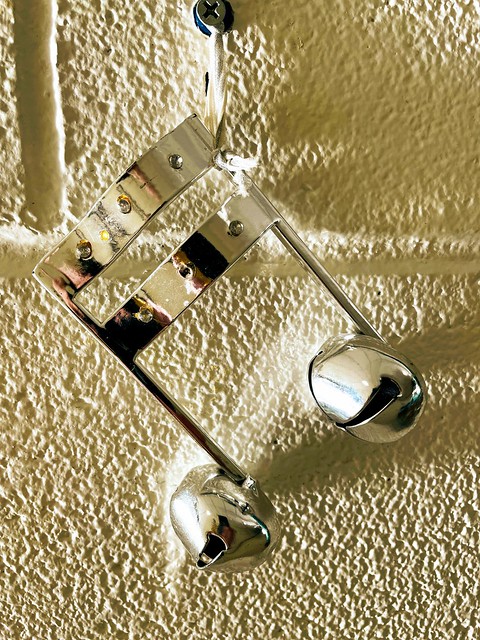 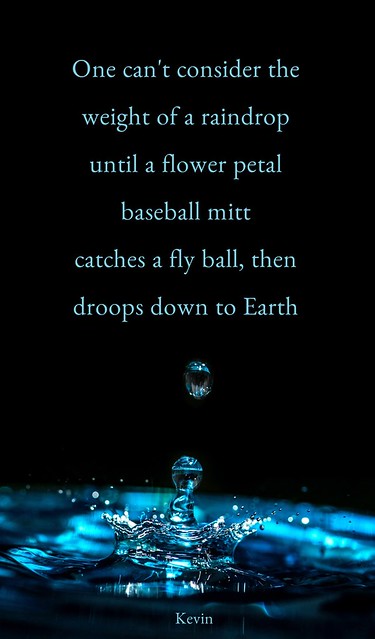 I am midway through a month of writing poems with other educators for #verselove at Ethical ELA (I’ve been gathering my daily poems at my poetry curation home instead of at my blog) and this morning’s suggestion for a modified Tanka seemed a good moment to jump back to the blog for a post. 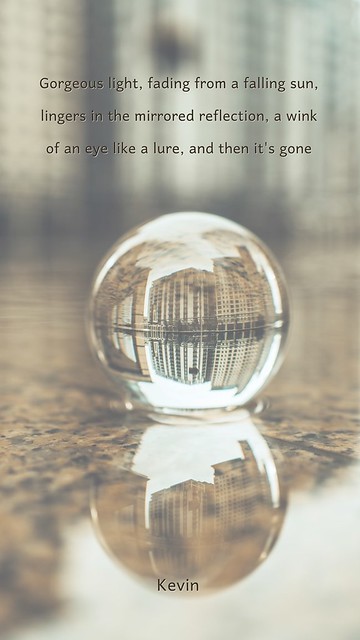 If you are reading this, I hope you are writing, too. 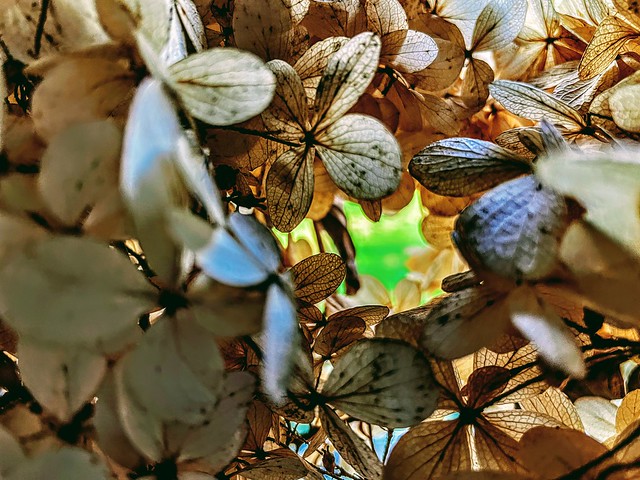 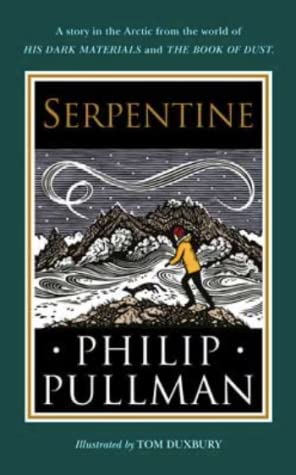 I admit: I didn’t have the right frame of mind as I read this short novella about a familiar character: Lyra. I am an avid reader of Philip Pullman and eagerly await the next book in his most recent series The Book of Dust. This small book — Serpentine — is a sort of in-between, set in the time when the first series (His Dark Materials) ended and the current series (Book of Dust) begins.

I didn’t realize that it was little more than an lingering idea of Pullman that came to fruition during a charity auction, and it was then that the story he wrote and sold off was pulled into this small novella, filled with evocative charcoal illustrations by Tom Duxbury. The story isn’t really a story, and would confuse anyone not familiar with the two series. The book is more of a written sketch of Lyra and her daemon exploring the notion of being separated, and what that means, as they head back north to ask questions of an old acquaintance about their situation.

Not much happens, plot-wise, and little is revealed, but the narrative here does connect to The Book of Dust and forms a bit of a bridge between the two series, which Pullman explains was his whole idea for conceiving Serpentine. I borrowed this  novella from the library, so it was a quick afternoon read that pulled me back into Pullman’s world for a bit, and that’s worked just fine.

Peace (connected by a string),
Kevin