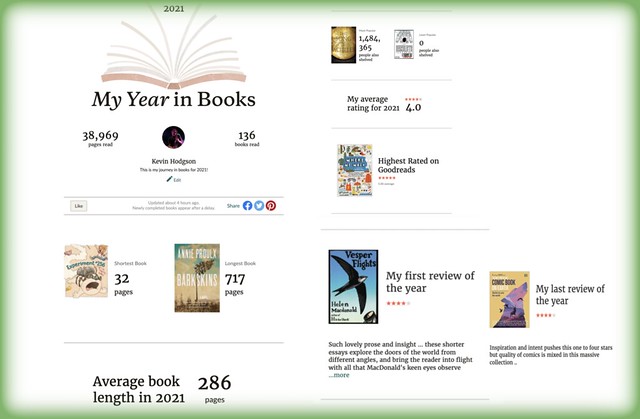 I’ve read some great books this past year … and grappled with a few duds … but mostly, it was good. I still use Goodreads for keeping track but I do keep wondering if it might be time to abandon ship and move to a more open source platform that gives me more flexibility and privacy. I know there are a few out there that seem interesting. Or I may stay with Goodreads (or, Amazon, which is why I keep thinking I want to leave). Maybe I’m a lazy reader tracker …

My friend and collaborator Terry Elliott has been on a “re-wilding” learning adventure, an internal and creative ‘hike’ of art and remix through words and poems and stories and media, and as is his nature, Terry has often invited others along.

Yesterday, he shared a poem and invitation for “trailblazing” and a phrase in his invitation to make something struck me: “… creating a chord on a piano that you don’t know how to play ..”

I pulled out my keyboard and plugged it in, found an interesting sound, and then with my left hand, I just sort of dropped it on the lower keys. It’s possible my fingers knew how to find a chord on their own (not that I am a keyboardist but I can do some basics) but the dissonance reverberation of where my fingers landed spurred my right hand to find a note, and then another, and soon, I had a melody developing. (Later, I wondered if I had pirated that melody line from somewhere else … it arrived so easily that I figured, maybe it’s not mine.)

I began to shift my left hand, too, moving the pattern of hand-drop around a bit, but intentionally not paying attention to where my fingers were landing. Eyes closed now. My attention was on the sound, and the small gaps where dissonance and tension opened up into something clearer, and my simple melody lines of my right hand continued to dance over the top of those “chords” of my left hand.

This took me all of about ten minutes to complete, with no planning and very little thinking and the record button “on” and, you know, I liked the results very much. I added the music to an image rendition of Terry’s poem. Trailblazing is always worth the time.

I’ve been having some remix fun with an original song that my friend, John, and I wrote and recorded and share out this time of year. The other day, I did a more classical instrumentation remix (see below) and then, I went in another direction entirely for this one (see above). I tried to give it a little more funky beat. (And played around with the image cover).

And the original (recorded in a studio, with video produced by my son):

Peace (to the world),
Kevin

Is it just me or are things seemingly sliding further and further off kilter? I think, or I hope, by nature, I am normally an optimist, seeing possibilities instead of barriers. That’s one reason why I am a teacher. The future always looks bright from the classrooms of today. But I am also a realist, and from this seat, it seems like the world at large has gone slant.

Politics. Economics. Environment. Pandemic. Will the new year be better? I hope so but I am not so certain, given the undercurrents of division and chaos that seems to be nearly everywhere. And 2022 has all the markings of another year of more political tumult (and Trump). 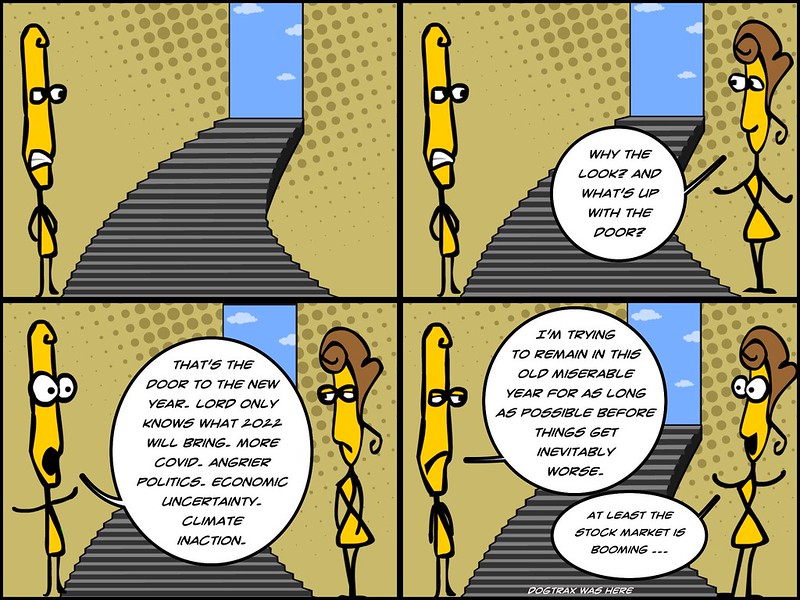 Look, I’m not throwing my hands up and giving up on the world.

I’m going to continue to look small. I love my neighborhood, and all of the people here. We look after each other. We connect. I love my networks online where I make art and share writing and create things together, globally. I love my family and our dogs. I love the woods, the rivers, the quiet spaces. And I still love teaching, even though public education has become increasingly stressful and difficult, and politicized.

I’ll hold on to those other small things. Because when I look at the larger world … good lord … it’s hard to believe we’re heading in the right direction anymore.

(Then I remind myself: Covid vaccines are an engineering/medical miracle on a scale never seen before. So there’s that, for those of us in the developed world. And clean energy technology is developing at a rapid pace. That’s good, too. And young people are demanding a better world through collective action. Another good thing … hmmm … maybe I woke up too pessimistic this morning.)

Peace (shaking it off),
Kevin 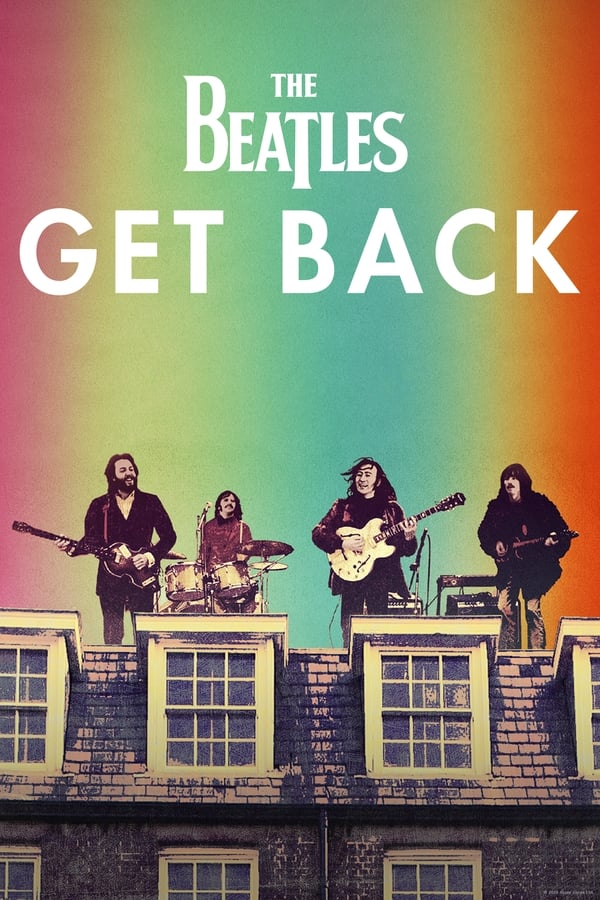 Seven and a half hours is a long slog through any documentary, and my family gave up on Get Back (about The Beatles) but I kept with it because I was fascinated by the songwriting process of the band, in the studio, under pressure to produce new songs, quickly.

There’s a now famous scene — the one that sticks in my head, too — where Paul McCartney starts pounding on his bass by himself, almost in frustration of the tension of the moment but also, he seems just lost in the rhythm of what he’s doing, and then, from that nothingness, there begins to emerge the first melody and first words of the song, Get Back, and as we watch, you can see McCartney working out what will become the iconic song (and title of the documentary we are watching.)

Over the course of the documentary, in fact, we watch as the band takes those initial inklings and transform the ideas into the song that will define the roof-top concert that is the finale at the end of the movie. George and John slowly work in guitar parts over the days, and Ringo keeps the beat, and Paul, at times with help from John, works and revamps the lyrics into stories of the characters in the verses, changing words and phrases as they practice the song. They debate single words, and phrase flow.

I love all that — the way the movie peels back the songwriting process, and as a songwriter myself (although nowhere near their level), I saw a glimpse in the movie of how I often start a new song, too — sometimes with no ideas at all, but just a faint rhythm on the guitar or a loose melody line or maybe a phrase or two that emerges out of nearly nothingness.

Here’s a lyric sheet of mine for a music collaboration I had done (for Whale’s Lantern global collaborations) that shows what I’m talking about: 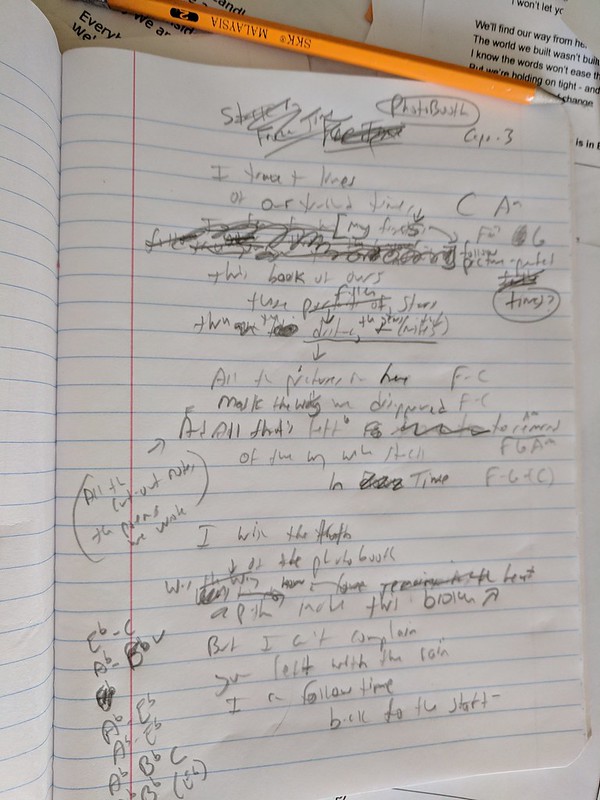 While McCartney is clearly in his songwriting prime here (or so I might argue), it’s also interesting to see Harrison bringing in his new songs, and trying to get the attention of John and Paul to see the value of his creative songwriting, and of his voice as an artist. (Not all that successfully getting their attention, it is clear). I enjoyed those moments of George and Ringo before the others arrived, as they jammed out on George’s songs, ones that would emerge later on his own albums after failing to make the cut with The Beatles.

Even Ringo sits down at the piano at one point, and plays the opening to Octopus Garden for George, who then gives a master class on how to take a snippet and move an idea into a song, as he helps Ringo explore transitions, bridges and development of the chorus over chords. It’s a wonderful moment of building a piece of music from the two members who are not Paul or John.

John’s songwriting process is less visible, though, as he had probably entered a time when he was writing less with the others, and more on his own, bringing in fairly finished songs to be learned by the band, not to be developed by the band, if that makes sense. He seems less in the vein at this point to share the vulnerability of the songwriting process with the others. (or maybe my observation is limited by what we see on film).

PS — years ago, I tried to capture the writing of a song in a video on an old flip camera. I found it in my archives. It’s difficult for me (now) to hear myself (then) thinking out loud like this but … 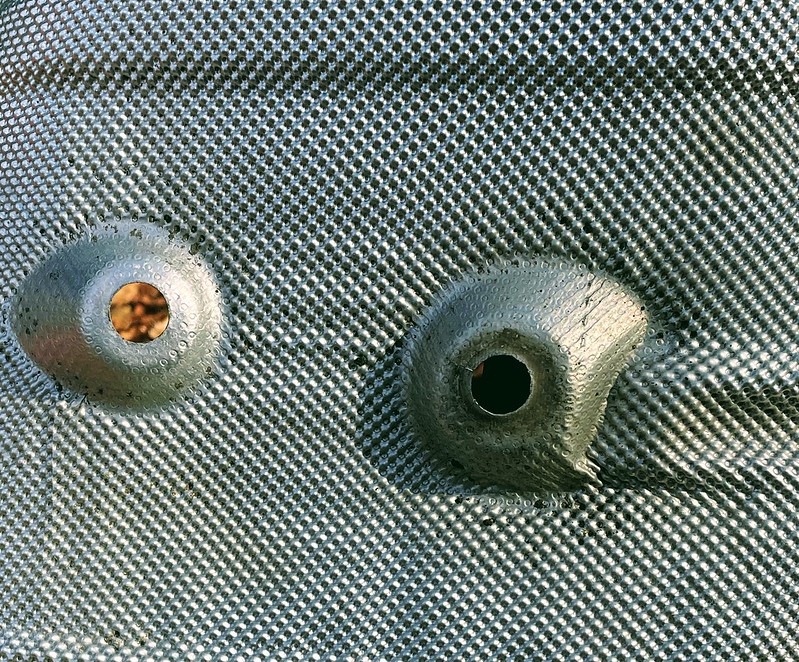 Peace (looking out, looking in),
Kevin

I was doing something else on my guitar when I realized I was remixing our song, A Gift of Peace, and then that remix suddenly drew me in with full attention to honor the original but at a slant. In the end, I went in an entirely new direction than where I started, but I like this instrumental version of our song.

This is our family tradition, sending words forward by placing them into glass.

Peace (to you and your family),
Kevin

We’re nearing the finishing line of our Hero’s Journey Video Game Design project, in which my sixth graders have been working to create video games that represent story. As usual, their focus remains on design and building the game as I repeatedly force them to consider and work on the story aspect of the project. Somehow, they both balance out, mostly, by the time we reach the finishing line (this week, before break).

I shared out the following video yesterday, showing my own play inside some of the games that students have been designing, as a sort of video game design mentor text. I chose games that were made by writer/designers that effectively used the message areas to set a story into motion that the player/reader plays/reads. (I used a filter in Animoto to catch their attention with my video excursions).

Today, we will do some peer reviewing/feedback of games and then by tomorrow, most if not all games should be done and published inside the Gamestar Mechanic community for players around the world to engage with.