Today’s Wonder poem is about the Grand Canyon. I found myself thinking of the water more than the rock with this one. 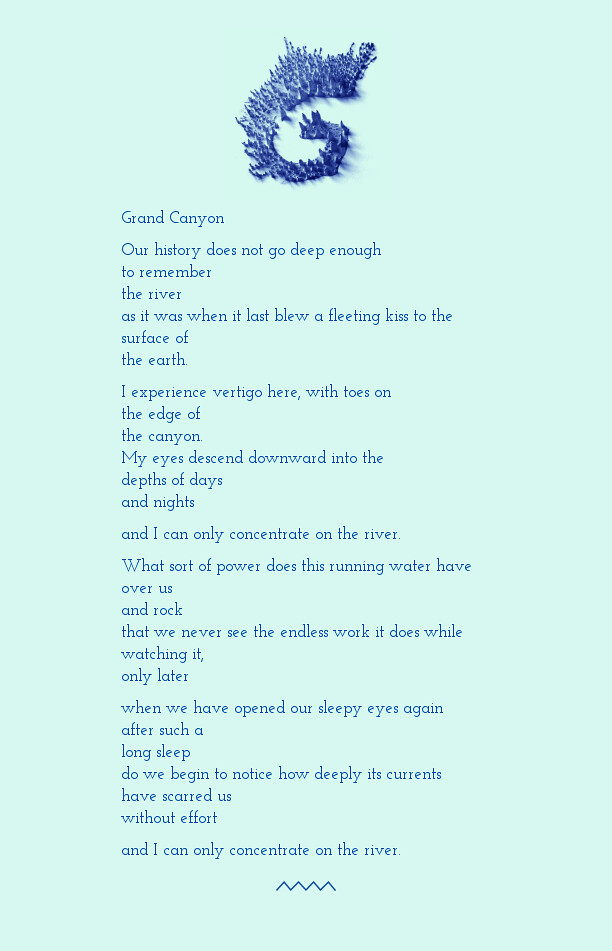 Peace (in the look down),
Kevin 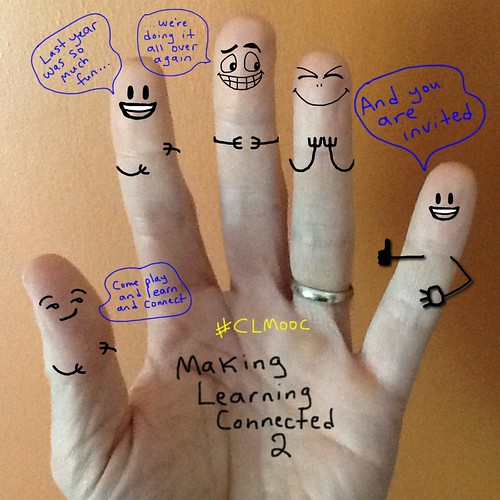 We’re starting our planning for this summer’s Making Learning Connected Massive Open Online Collaboration (notice how we don’t say “course” — that’s important) or CLMOOC. We’re in a very soft launch mode right now, but you can visit the FAQ page and add your email to our update lists.

Basically, it will be a summer of play and exploration and learning, all under the umbrella of Innovator Educator‘s Summer to Make, Play and Connect. We had great success, and a blast, last summer and we’re working to build on that experience for Round Two. Making Learning Connected runs from June 13-August 1, 2014 and we use the Twitter hashtag #clmooc.

One thing I have been intrigued about when it comes to doing some research on the topics for the Wonders of the World poems are the translation of names of places on the list that Mary Lee has pulled together. So, this morning, when I was learning about Chichen Itza, the Mayan city, I was intrigued by the poetic translation of the name as “the mouth of the well,” and that led me into my poem.

As some of you know, I’ve been trying to work in different technology as best as I can into my poetry writing (although I am starting to feel that I might just fade the technology and concentrate on the writing as the second half of the month unfolds. We’ll see …)

This morning, I decided to check out Mozilla’s Webmaker space, to see if there were any cool remixable projects that might work well with my poem of looking ahead and looking behind. I did find one, although it is a bit more advanced than I am used to. But the beauty of Webmaker is that the original creator leaves notes in the code for the remixer (Webmaker rocks!), so all I had to do was follow the instructions to create my own interactive poem page of “A Drink from the Mouth of the Well.”

(Click on image and it will take you to the poem)

I like how it came out, with each hovering over a section of the poem revealing a stanza. I did podcast the poem but could only fit it at the bottom of the page, which is not ideal, although I suppose this way, the audio does not disrupt the reading of the poem in sections.

Peace (in the remix)
Kevin

This is an amazing resource about Web Literacy ideas. Click on a skill and see a pathway forward towards new skills that connect back to the original inquiry. (nicely done, Laura Hilliger and other folks at Mozilla). Plus, the whole resource is remixable, so you could revise it for your own audience and purpose.

Peace (along the many paths),
Kevin

It’s difficult to read about Machu Picchu (as I did this morning for our Wonder poem selection) and not be saddened by what the Spaniards wrought when they came to South America and reshaped the world with violence, and illness, and their quest for gold. I understand I am looking at it from a modern perspective, but still …

So, this morning’s poem about the city on the mountain is in the form of a ransom note (using the cool ransomizer generator:
History held ransom

to the armies of Spanish invaders;

carved in by Inca creators,

scared, and on the run

who traveled from the edge of the world

of time and wind and daggers

of violence and royal decrees and wagers

that gold and conquest become the power;

these ghosts are now natures painters.

Here is the poem in plain ‘ol English:

History held ransom
to the armies of Spanish invaders;
abandoned walls
carved in by Inca creators,
scared, and on the run
fleeing armed strangers
who traveled from the edge of the world
bringing untold dangers
of time and wind and daggers
of violence and royal decrees and wagers
that gold and conquest become the power;
yet here, now,
these ghosts are now nature’s painters. 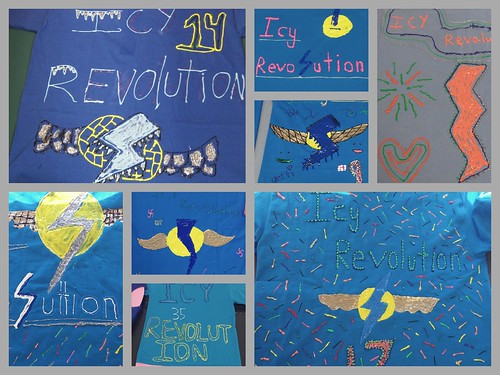 Today, we play our annual Quidditch Championship between the four sixth grade classrooms. I don’t know if my homeroom team — Icy Revolution — will win or not, but I do know that the day is going to be crazy, hectic fun. And loud. Real loud.
(and tonight, the kids play teachers in a Quidditch match. So, yeah, tired bones … here I come)

Peace (with a snitch),
Kevin

Today’s Wonder Poem is about Petra, or the Rose City of Jordan. Here’s another Wonder of the World that I knew very little about until Mary Lee put it on the list for poetry. I decided to write my poem in an open source writing platform called TitanPad. It’s sort of like Google Docs, in that you can collaborate, but I like how it creates a “timeline” of revisions, which I then captured as a short video of the writing of the poem. I can say there were no dramatic revisions here, just a bit of moving around words and fixing syntax. So the timeline-effect is not as dramatic as it could be.

This is the final poem itself:

How many hands
dug deep into mountains to remake it?
How many lives
were lost in the mountain to reshape it?

Where are the ghost defenders
praying deep into the night to save it?
Where are the brave contenders
seeking for the right to take it?

This city shackled in the earth –
red with history —
calls to me.

It really is true: there’s nothing new here. Not with Twitter. Not with Facebook. Not with blogging. Not with any of the social media that we keep saying has “upended” traditional media. In this fascinating look at social media over the past 2,000 years, Tom Standage digs deep into our historical roots to show how the flow of information along social lines has been one constant thread through various phases of civilization.

Writing On the Wall is a fascinating read (and I heard about it from a book review column a friend of mine does at the Boston Globe, where her focus was books about social networking), starting off with Cicero in Rome, asking friends and allies to make sure they sent news of politics and government via notes, complete with comments, delivered by friends, and then moves into the use of pamphlets and scrolls and the printing press and more communication systems from the past that eerily echo the present.

In fact, Standage argues that the media empires that are now starting to fade (ie, newspapers) are the anomaly of history — in that the power to curate information and spread it out fell into the hands of a relative few (ie, publishers and editors and reporters) — and that if you look before and after that blip in time, you can see how prevalent the impact of widespread information is by “the people.”

“…social media is not going away. It has been around for centuries. Today, blogs are the new pamphets. Microblogs and online social networks are the new coffeehouses. Media sharing sites are the new commonplace books. They are all shared, social platforms that enable ideas to travel from one person to another, rippling through networks of people connected by social bonds, rather than having to squeeze through the privileged bottleneck of broadcast media. The rebirth of social media in the Internet age represents a profound shift — and a return, in many respects, to the way things used to be.” (page 250)

PS — here is a talk that Standage gave to Google about social media:

Today’s topic for the Wonders of the World poem is the Panama Canal. I had this vision of lovers on either sides of a lock. I sort of went into an ee cummings mode here.

you, there;
me, here;
waiting, wondering when the water
will rise up to reach us

i stand, forlorn,
knowing that perfect equilibrium
is hard to find
particularly when everyday is a day under
construction

and when we are in this place

You can view the poem in a prettier form at Notegraphy, too.

And a podcast. It felt right that I needed voice to this one. Do you agree?

Peace (amid the waters),
Kevin

The Delta Works sounds like a band out of Memphis, doesn’t it? But it’s really a complex engineering system to hold back the ocean in the Netherlands, and as I read about for this morning’s Wonder of the World (with Mary Lee), I had this vision of a shape poem in my head. I had shared Coggle out with some folks last week, and so I decided to dive back into the mindmapping site and create a flowchart poem of the Delta Works.

You can “read” the poem as static image here:

Or you can play around with the embedded flowchart from Coggle:

Page 3 of 6123456
Thank you for visiting this online writing home. I am a sixth grade teacher and a co-director of the Western Massachusetts Writing Project. This blog covers a lot of ground -- from teaching, to writing, to music, to art and beyond.