This is for the Slice of Life writing challenge going on all month.

Peace (in the days),
Kevin

I don’t know about you, but I am always searching for interesting ways to introduce and explore/understand new vocabulary with my students. It’s not easy, and exposure is not enough. The students need to be engaged. So I was intrigued by this little book by Ken Pransky called My Fantastic Words Book. On one hand, it is billed as a “young student thesaurus.” On the other hand, the visual elements of this small book for breaking down and extending words could easily become a model for a classroom activity around new vocabulary at any grade level.

Pransky almost views the words here as visual templates, and then expands them along realms of synonym/antonyms, degrees or meaning, and other framing ideas. It’s hard to describe but the concept of word clouds is what comes to mind here, although each page has different shapes to them, depending on the word. For younger students, this book might be just enough of a thesaurus for stretching out their writing (although the number of words in the book are limited to common ones, such as say, go, mean, sad, etc.). For older students, it could become a model for how we often try to add nuance to our language by choosing other words along a synonym trajectory. I am going to bring this book by my co-teacher and see if we can’t brainstorm a creative way to approach some vocabulary words, as Pransky has wisely situated this book (in a one-page teacher’s guide) as a strong way to approach vocabulary development with students who have learning difficulties and ELL students. The graphic element is a key piece. And I am already thinking of the technology possibilities here — either with a simple drawing program or maybe some word cloud generator, or maybe something else altogether. It might be that a site like Visuwords is a companion to My Fantastic Words Book. This is part of the Slice of Life Challenge, and also, a connection to my slice on Saturday. I am helping to co-facilitate a professional development class this spring (it began in December, actually) around writing and literacy and the Common Core with an area elementary school. Our work is being funded through a generous grant by the National Writing Project, and administered through my Western Massachusetts Writing Project. We have a great group of teachers who are diving into literacy and will soon begin an Inquiry Project that will move us forward into the end of the school year.

The other day, we spent our Saturday in professional development activities. (There are three of us co-facilitators from WMWP helping to guide the sessions). My role was introducing research components to the teachers, and to get us thinking about ways that research might not only inform learning, but what it might look like in the classroom. Our main text was Chris Lehman‘s fantastic book — Energizing Research Reading and Writing (which I highly recommend) — and each teacher has their own copy of the book, which sparked some interesting discussions about how research projects look now, and how they could look as we consider the Common Core. On a whim a few weeks back, I asked Chris if he might be available to Skype into our session, and discuss what he discovered as he wrote the book and to answer questions from the participants after they had read his book. He agreed, and his virtual visit was a huge hit. Not only is Chris a passionate professional development leader, and a talented writer and researcher himself, but he connected with this audience of teachers in a struggling urban school and he really inspired them to look closely at their own teaching practice. We covered a lot of ground in our short Skype visit, from narrowing down topics, to finding and using sources, to the role of audience in the writing.

My other motive was to begin to show the teachers how the technology they have in their building might open up some more avenues for learning for them and their students. A few of them asked me about Skype in the Classroom — wondering how to invite authors into their classrooms. As we begin to use Edmodo for sharing about Inquiry Projects, they are considering if the site works for their students as writers. Our aim is to embed learning and technology in the PD in a meaningful way, and make it useful and viable for classroom instruction as well as teacher learning.

The visit with Chris was a good example of that: it not only brought some more expertise into the room that day, expanding our work around research and writing, it also demonstrated the power of technology to make connections, with relatively little fuss or set-up. And I deeply appreciated that Chris gave up his time on a Saturday to share some of his understanding with our teachers. They appreciated it, too.

Peace (in the visiting),
Kevin

I am going to add the media element to my Slice of Life posts this week, if I can. I am already using the six word story format on Twitter, with Soundcloud as my accompanying podcasting site. And now, I am tapping into Haiku Deck to create a simple slide, with background image. Upping the ante … not sure if I can sustain it!
This slice is about a conversation I had with my son about walking into a bookstore. He made me feel like an old man.

My slice of life:

Peace (in the balance),
Kevin

I am going to be leading a Hackathon session with the Western Mass Writing Project in a few weeks and so I wanted to try out (again) how X-Ray Goggles (from Hackasaurus) work as a browser tool to allow you to “hack” websites (basically, you are messing around with the overlay of text and images and making a copy). I was pleased to see that you can now publish your hack right through the tool itself (that will be handy for sharing).

Here is what Education Week looked like before I got busy on it: Here is how it ended up when I was done: So, why hack? Why teach it? Well, it has to do with a form of literacy, right? We remake media messages, deconstruct it and revamp it, and in doing so, we understand the original source even as we are making our own message. This is all about critical thinking, and engagement, and putting creativity into the hands of users — of helping to make the shift from passive consumer of media to creator/remixer of media.

Peace (in the hacking),
Kevin 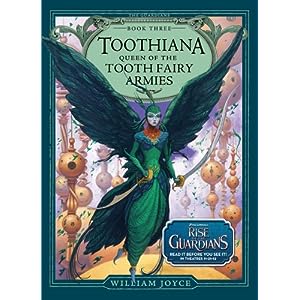 We waited for almost three months for our library to get a copy of the third book in The Guardians of Childhood series. This one is called Toothiana, Queen of the Tooth Fairy Armies, and like the other books in the series by William Joyce (who is developing a cross-platform franchise for The Guardian idea: books, movies, games), it has its up and downs.

The story revolves around the continuing development of the team of Guardians (which include Nicholas St. North and Bunnymund and Oombric the wizard, along with Nightlight the boy of pure energy and light, and the Man in the Moon) and their attempt to rid the world of Pitch, the king of nightmares who feeds on the bad dreams of children. A main human character, the orphan Katherine, gives the stories a childlike wonder and point of view, as she is part of the Guardians and sees more than evil in Pitch.

(Note: my son and I are reading the series together. Well, I am reading it out loud. He’s an active listener.)

Here, we meet Toothiana, and her origin story was the most interesting part of the novel, although she does not make an appearance until almost halfway through the novel. I won’t give it away but it involves a monkey king, a ruby box of magical teeth, a flying elephant, and tragedy. She also looks like no other tooth fairy you’ve seen before. Joyce depicts her as a beautiful warrior, armed to the teeth, and ready to protect children at any cost. She also has an army of mini-Toothianas that are smaller versions of herself (thus, the army).  In this depiction as a warrior, she fits in perfectly with the other stories, where Joyce has begun reworking our conceptions of idols connecting to holidays.

Even though the writing ebbs and flows (in my opinion), the plot kept us both interested (my son wasn’t all that concerned with the writing, to be honest.) And this book left off with an intriguing cliffhanger in which a mysterious and powerful figure, who may be Mother Nature, enters the fray and steals away Pitch and the human girl, Katherine.

And now, we look forward to the next installment in the saga (not due out until September): The Sandman and the War of Dreams.

Peace (in the magic),
Kevin

It’s day two of Slice of Life. I won’t be sharing my slicing here every day, since I am mostly going to try to use Twitter and Soundcloud as my main platforms, at least at the start. But here is what I wrote this morning, reflecting on how we used Dr. Seuss in class yesterday.

I had the good fortune to be asked by blogger Kirby Larsen to “sit” for an interview about my work around teaching video game design in the classroom. Kirby runs a regular feature at her blog in which she features teachers, so I was honored that I was asked. I didn’t realize that I was going to travel down memory lane to my childhood for the first part, but that was fun, and it got me remembering my own sixth grade teacher, Mr. Dudak, again.

Head over to Kirby’s Lane to check out the interview

And thanks to Kirby for thinking of me!

Peace (in the blogging connections),
Kevin

Page 6 of 71234567
Thank you for visiting this online writing home. I am a sixth grade teacher and a teacher-consultant the Western Massachusetts Writing Project. This blog covers a lot of ground -- from teaching, to writing, to music, to art and beyond.