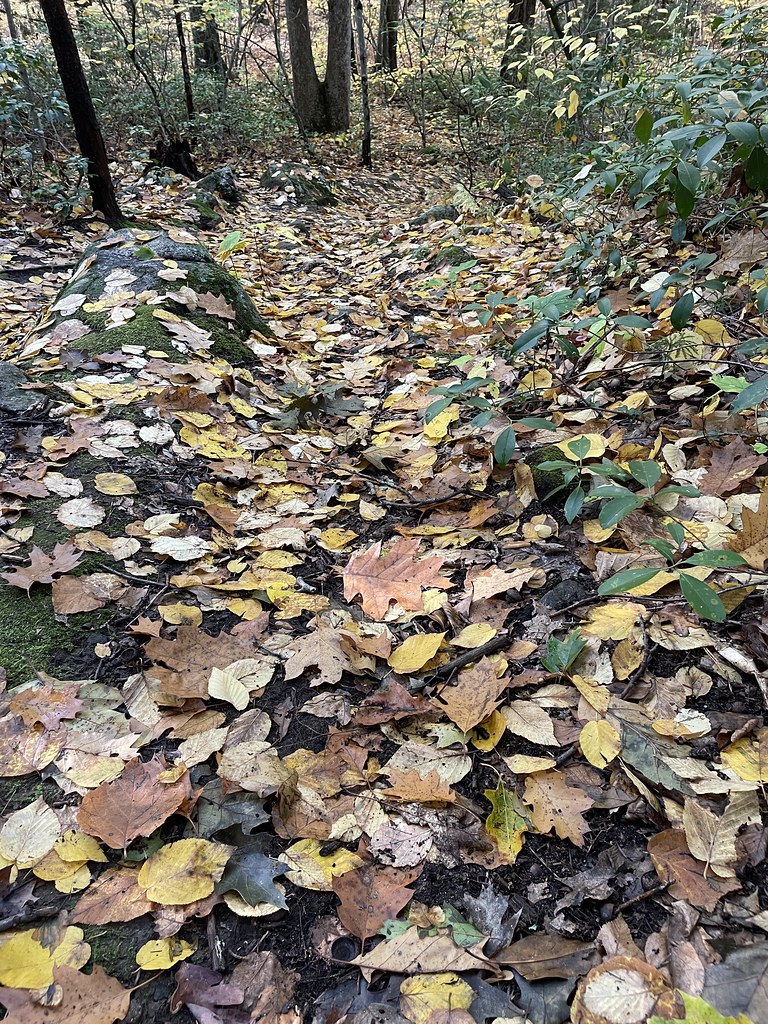 Peace (in the fall),
Kevin 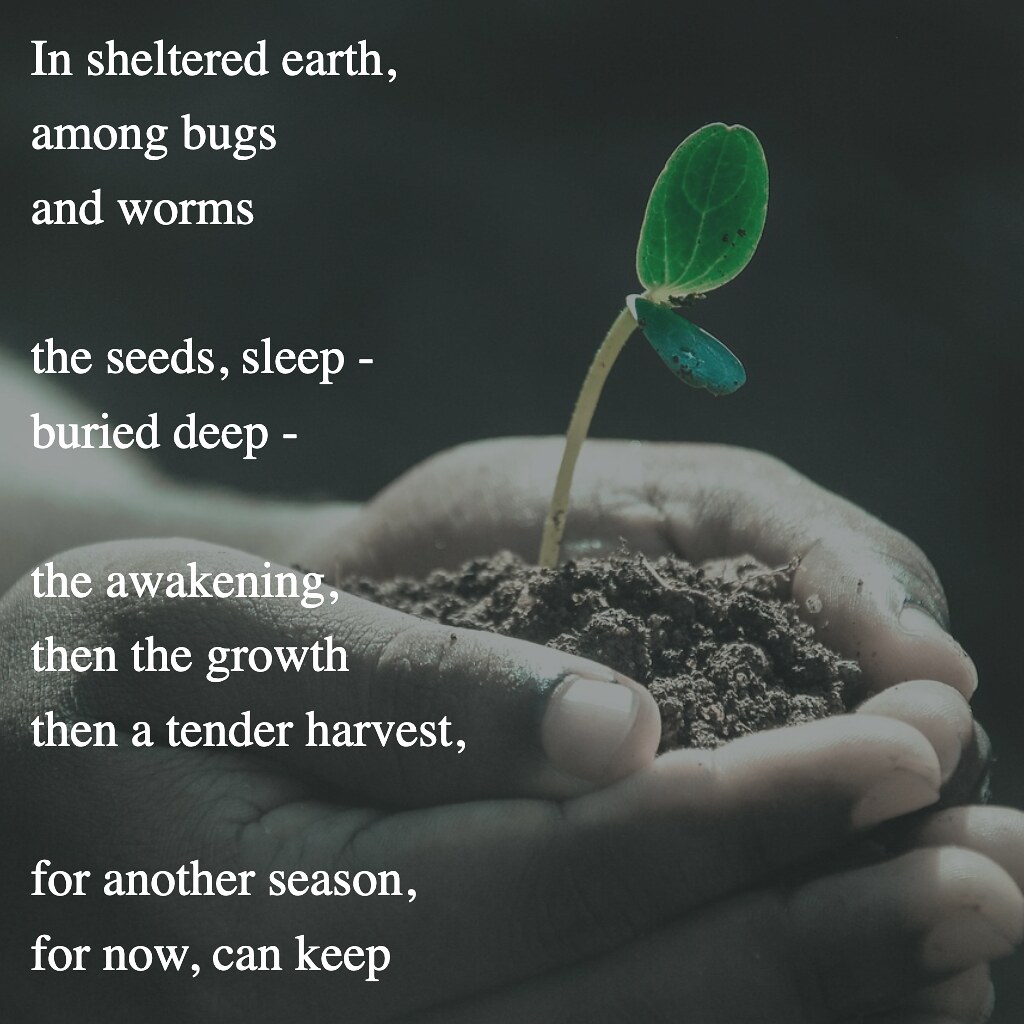 I often write my morning poems inspired by one-word prompts from the Mastodon social networking space. Since Write Out kicked off, I’ve tried to keep “nature” as a theme in mind for the small poems. 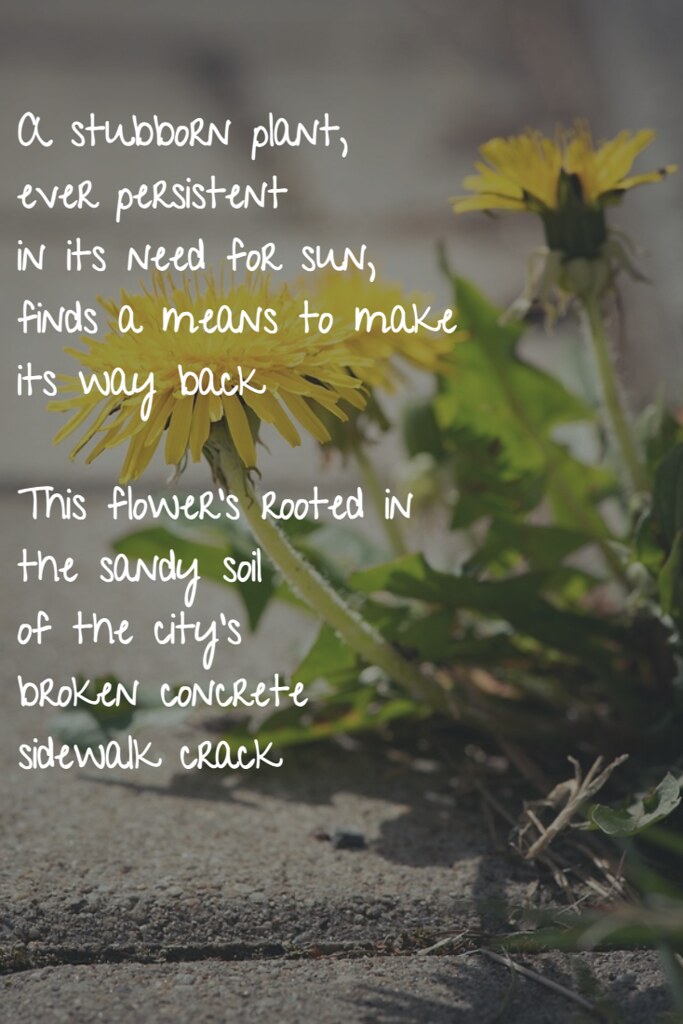 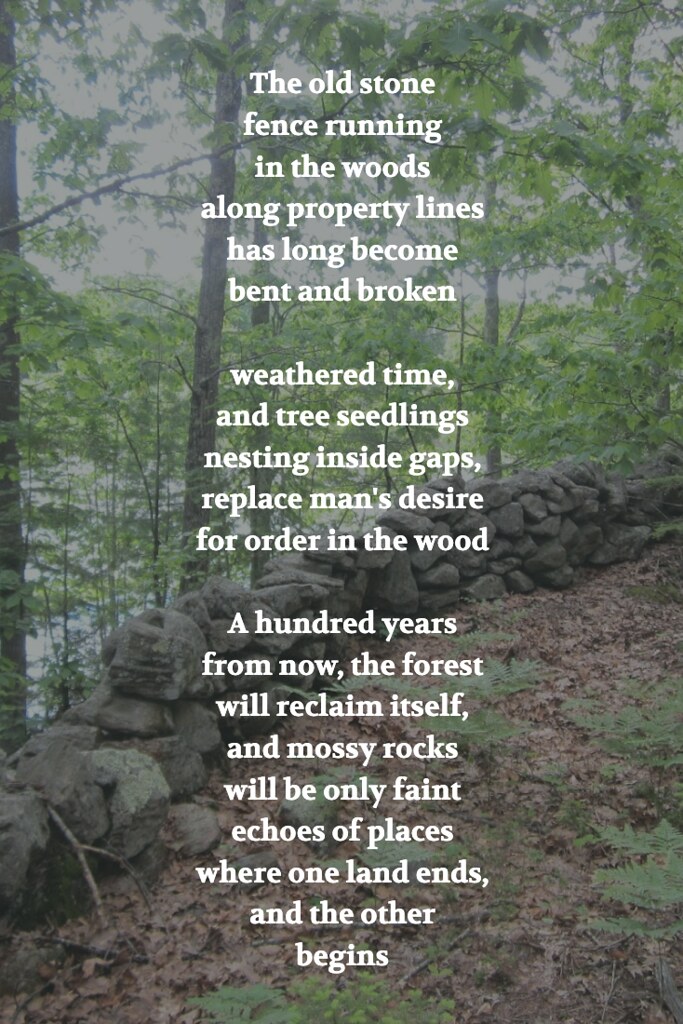 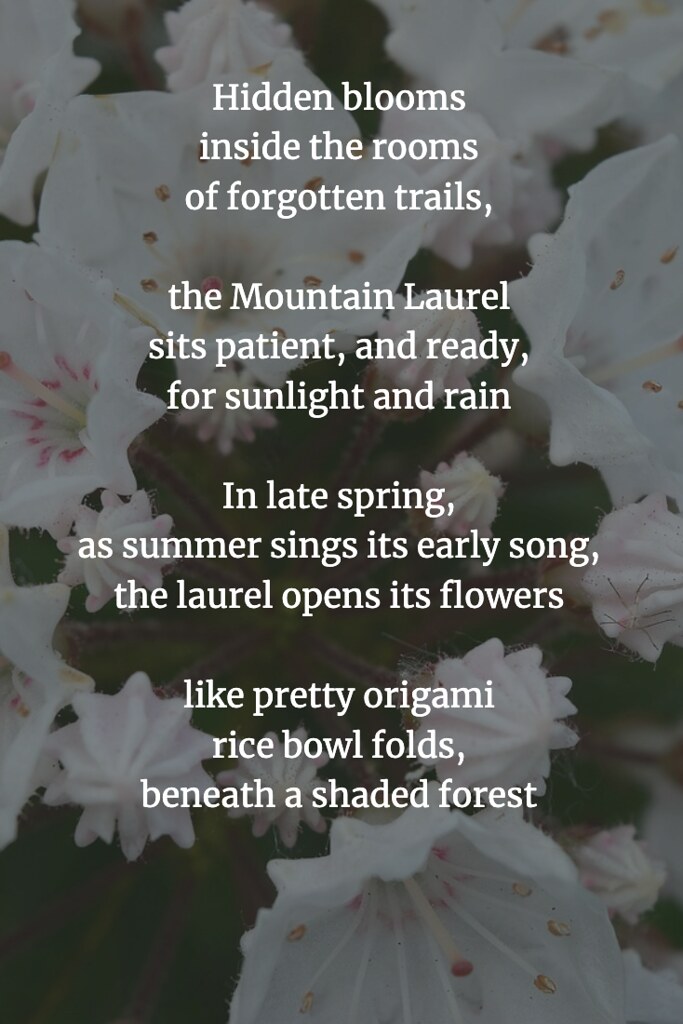 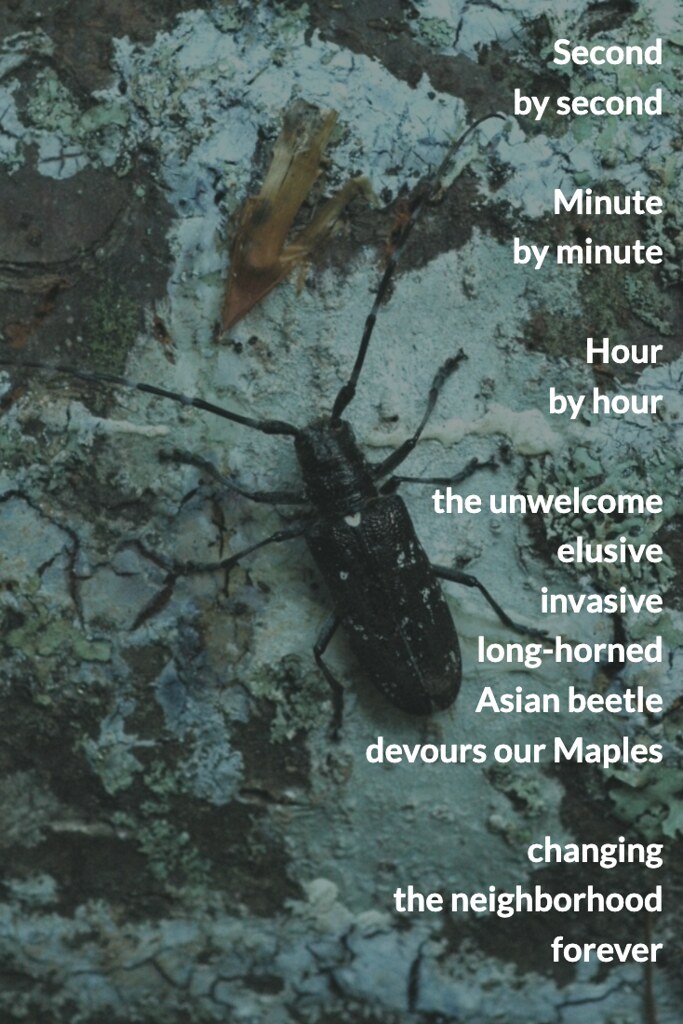 Peace (outside, in),
Kevin

A few months ago (it was August, I realize as I write this), I was thinking that I had not mailed out postcards to my CLMOOC network friends for some time, and after further procrastinating, I gathered together a collection of Poetry Postcards that had been gathering dust (I knew at some point I’d be sending them out to some friends in the CLMOOC network).

I pondered what kind of message to send with the postcards, which all had poetry-themed writing on them, and decided I would write a poem, and break up the lines, so that each postcard would have a section of the larger poem. I let folks know they were getting only part of the larger poem.

The postcard to my friend Wendy, in Australia, took the longest to arrive (longer than usual, I think) but now that it has, I told them all that I would share the larger poem with them. The end of each stanza for one person is a handoff to the next, which was given to another person.

Above is the poem, in the form of a video.

Here is the poem, as text.

A stamp is but a sign
of a poem in flight

a poem is but a kite
fluttering through the sky

the sky is but an idea
we seed from imagination

imagination is but an inkling
in which a world becomes built

a writer is but a poet
wrangling rhyme into prose

prose is but verse
flattened ink on postcards

postcards are but reminders
that someone is remembering

remembering is but a gift
we send to friends

CLMOOC is a loose network of educators and others who collaborate, make, share, and learn together. The Postcard Project is a way to get beyond “online” through mailed notes and cards, and a reminder that slow communication is just a powerful a digital networks. 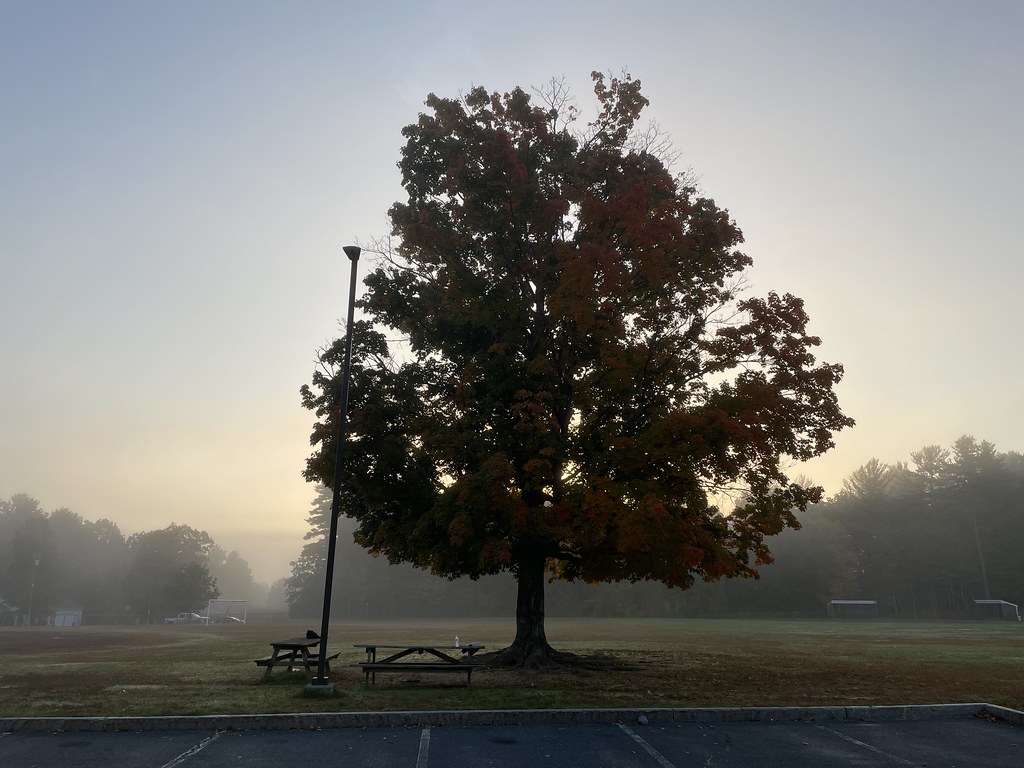 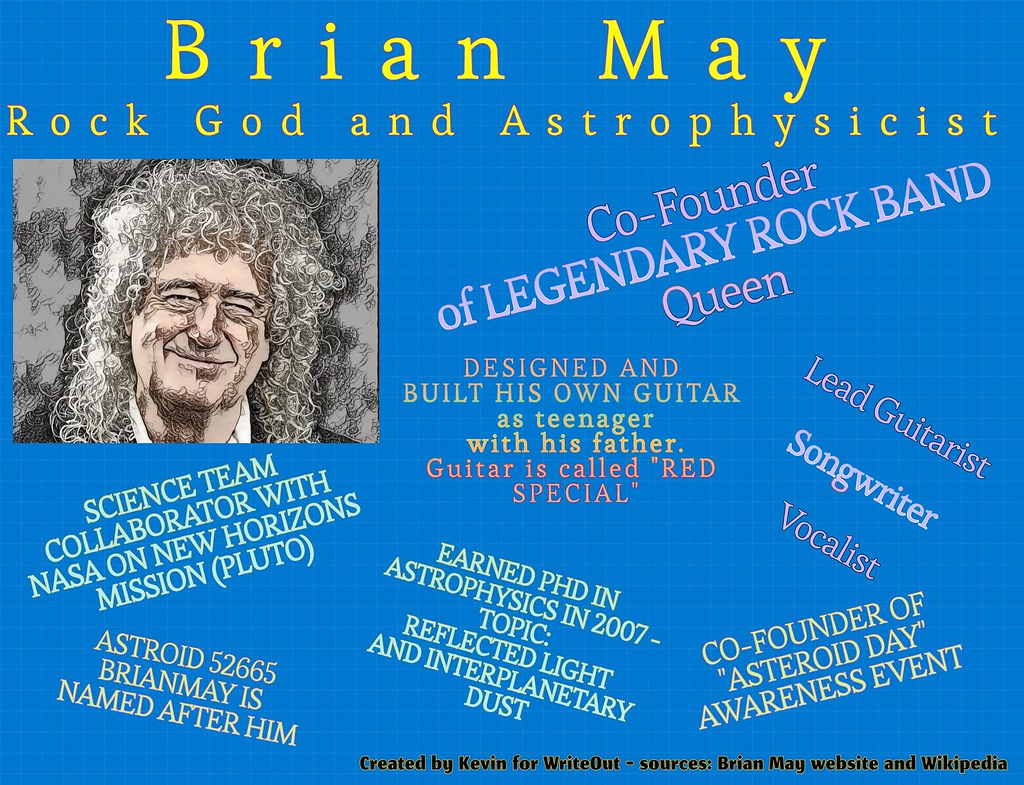 Last night, in a live session, Karen Romano Young led teachers through her wonderful project — I Was A Kid — that shines an artistic spotlight on a diverse group of scientists. She creates these one-pagers (after extensive interviews and visits with the scientists in their fields of study) and I thought it would be interesting to try a modified version myself, to see if her work might inspire something I could do with my students.

Last night, she shared insightful interviews with scientists, chatting about how they use data journals and field notebooks for their work, and it was pretty fascinating to hear the scientists and to see their journals in all of the variety of forms.

For my activity that is inspired by the work of Karen Romano Young, I chose Brian May, the guitarist and founder of Queen, because of his work as a creative artists a much a his work as an astrophysicist, and I just find his life to be pretty fascinating for the way his curiosity sparks his path forward.

I did my research via Brian May’s website and Wikipedia, and used an art app called Sketchpad to create my piece. The image used a photograph of May, but filtered with Lunapic for effect.

More about Write Out and the use of STEAM notebooks: https://writeout.nwp.org/be-inspired/ 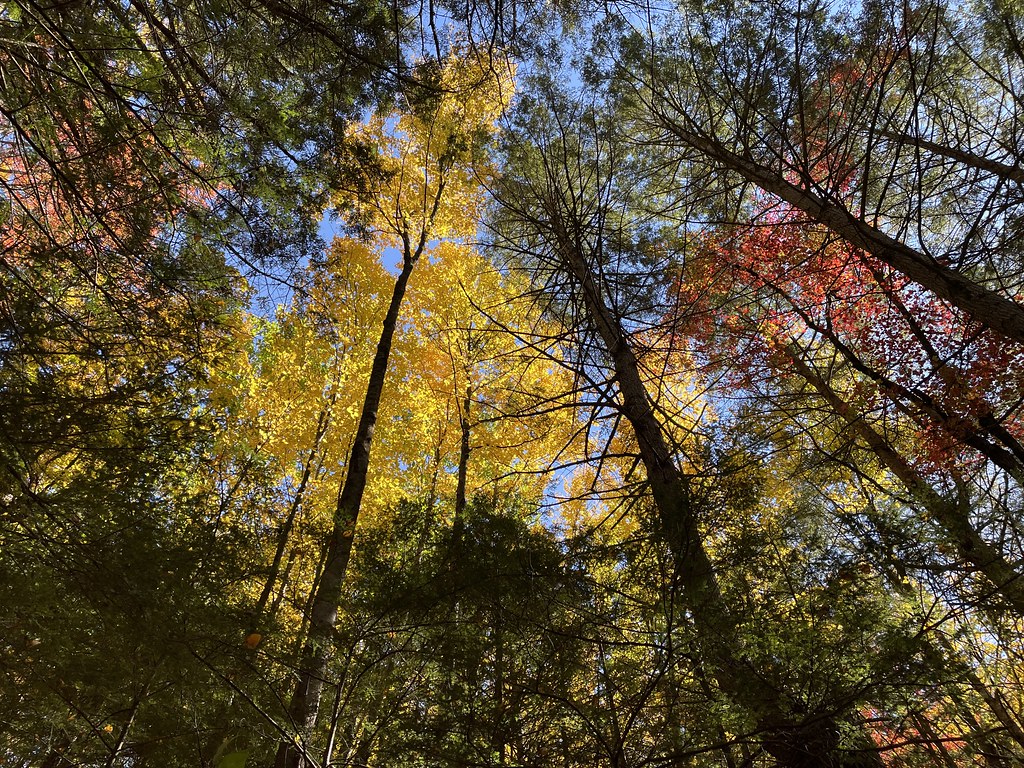 Here in New England, this October is breathtakingly beautiful. The trees are in the midst of change. The air is crisp and clean but still warm enough for comfort once the day kicks in. And with the start of the annual Write Out this long weekend (Write Out runs for the next two weeks), I was determined to get outside and be outside, and I am happy to say: mission accomplished.

On Saturday, we went for a long hike in a neighboring town, on a historic trail. On Sunday, I was for a long bike ride and found a nice “sit spot” along a canal, which is part of a state park area. And yesterday, my wife and I drove an hour north, into Brattleboro, Vermont, where we found a nice boat put-in that began in an alcove of the Connecticut River, and then led us to the river itself, where for a long time, we didn’t see a single person (until a fishing boat showed up). 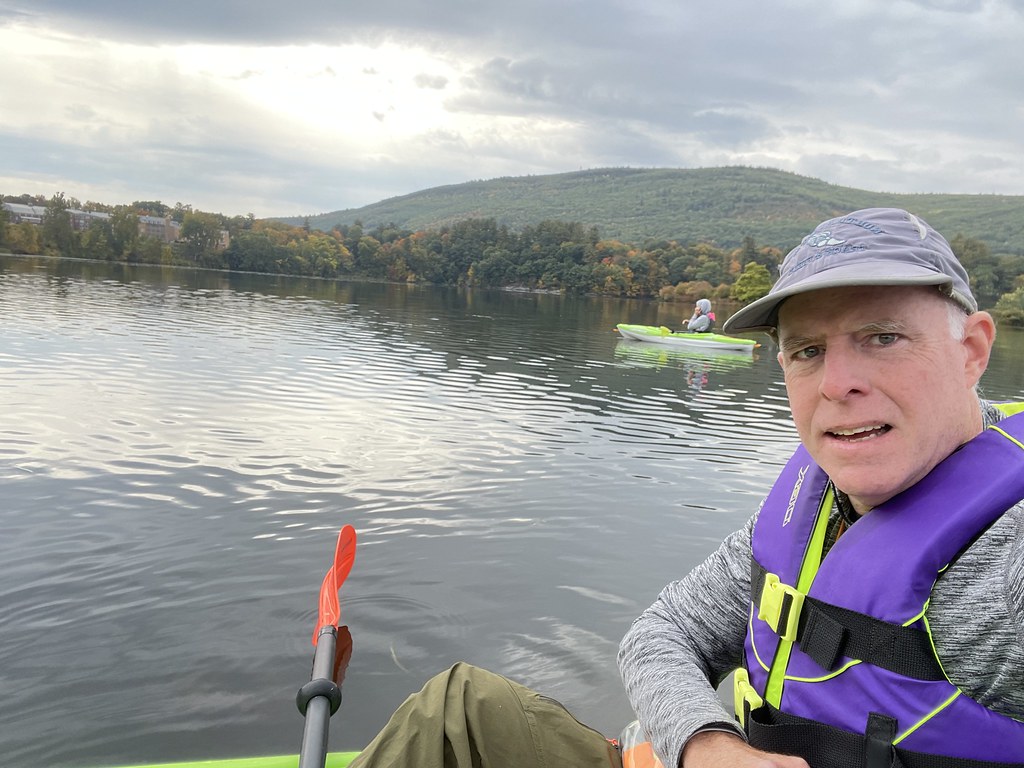 Now, I am planning out ways to get my students involved in the Write Out activities, from video writing prompts by National Park Service rangers, to STEAM-themed data and writing journals, and more.

Peace (in the midst of seasonal change),
Kevin 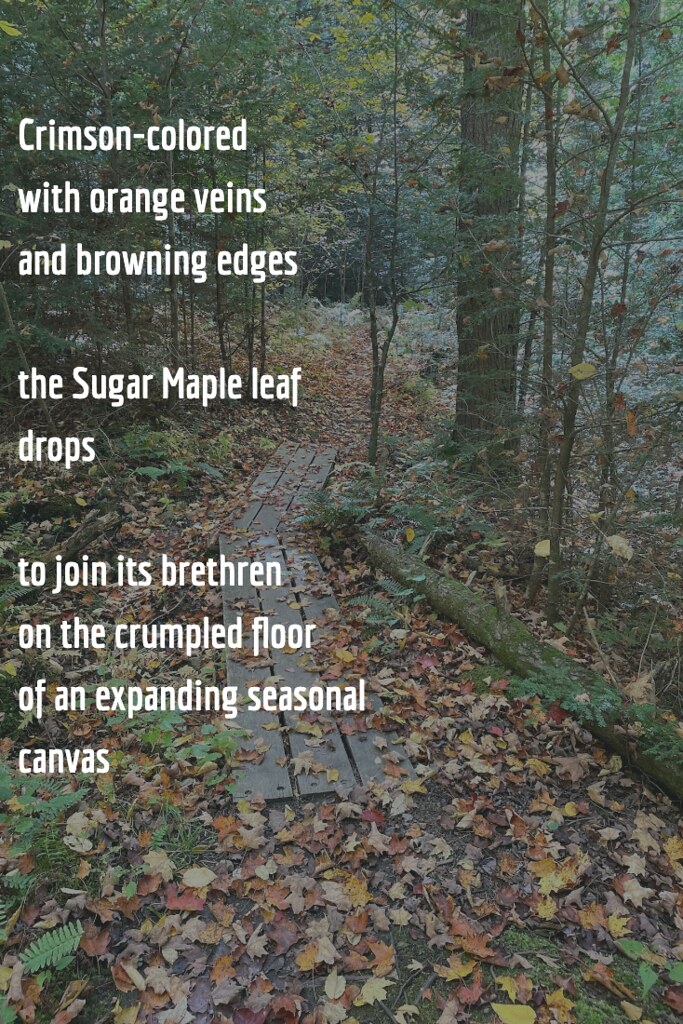 These two poems arise from one hike. 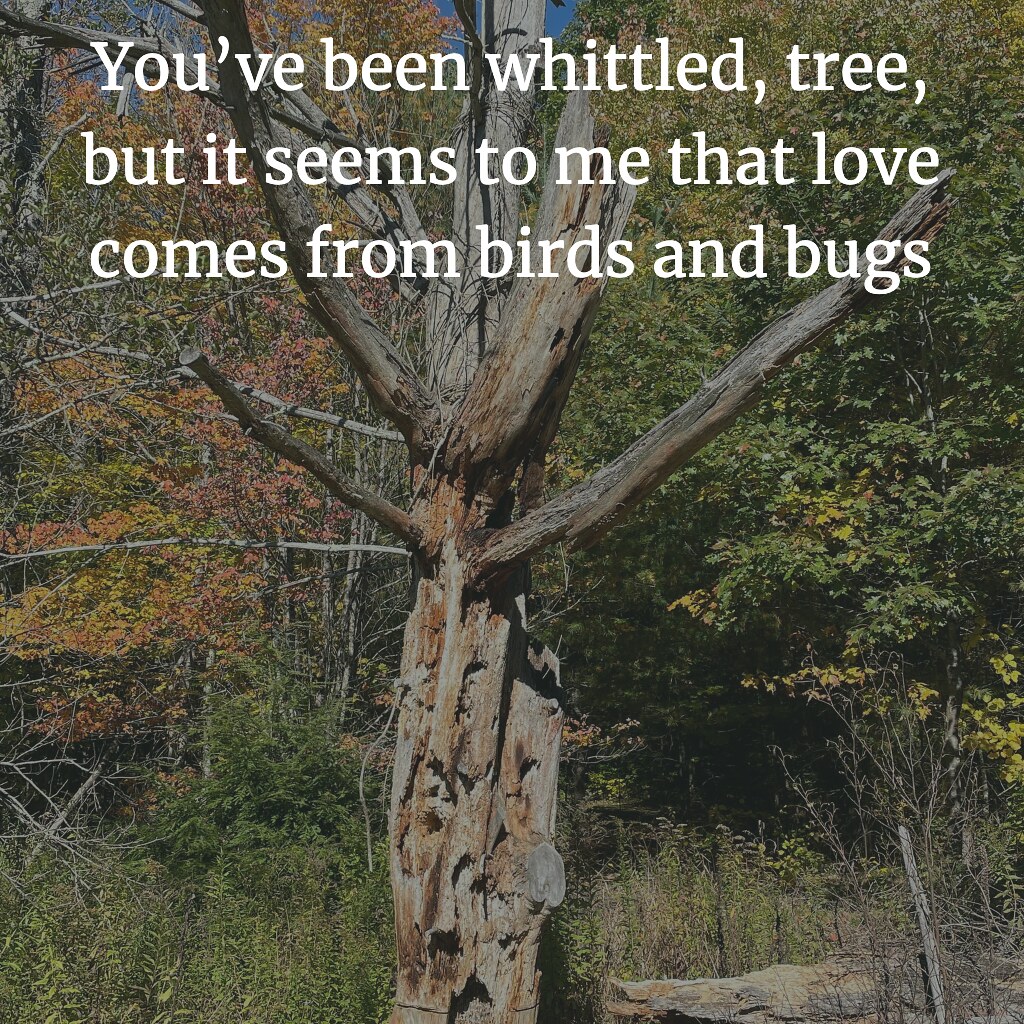 Write Out is a partnership between the National Writing Project and the National Park Service, and it starts today and runs for two weeks. There are plenty of free resources, events, writing prompt and more for teachers, students, families and others to do as a celebration of place-based learning, with a STEAM twist.

We hike a lot but we always try to get out on Write Out weekend, which falls during the start of the changing of the trees here in New England. Yesterday was no exception and we went into the woods to learn more about the disastrous flooding that took place here in our area in the 1800s when a massive dam fell apart, causing the river to rush downstream, destroying villages and killing more than 150 people, and forever altering the landscape.

The Williamsburg Historic Dam Trail had informational markers, and as we wandered into the forest, we imagined the size of the dam (40 feet tall and 500 feet wide) through what remains of it and the damage it must have done (and we got angry about how the wealthy owners got away with it, even though it was their negligence that led to the disaster). 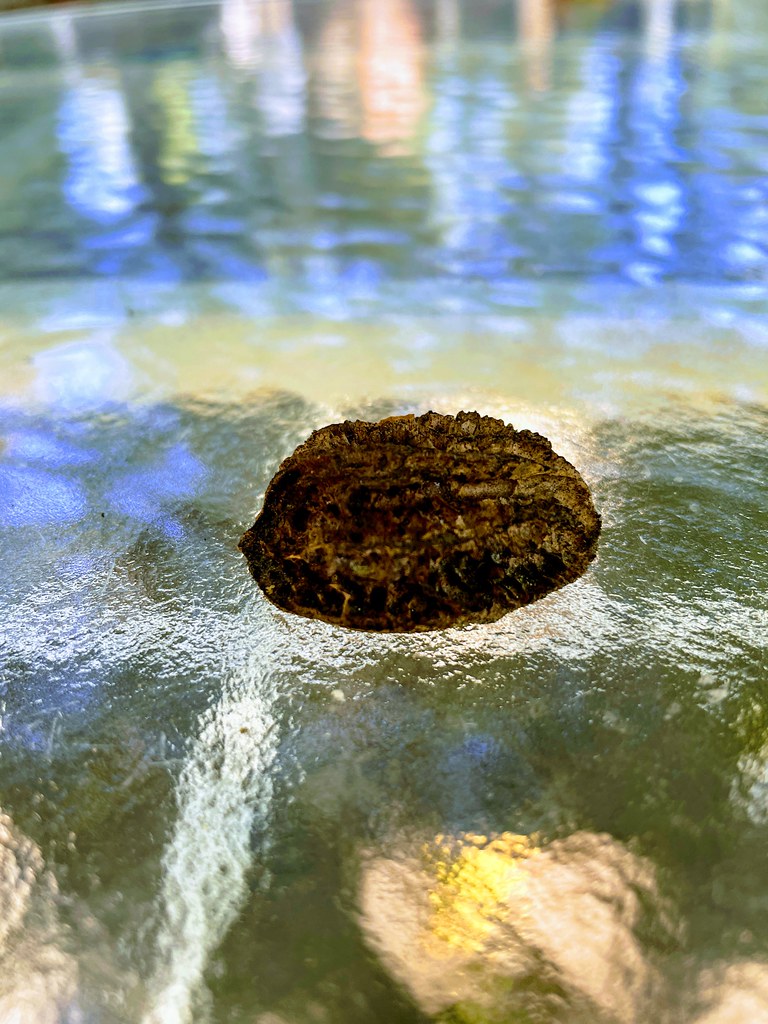 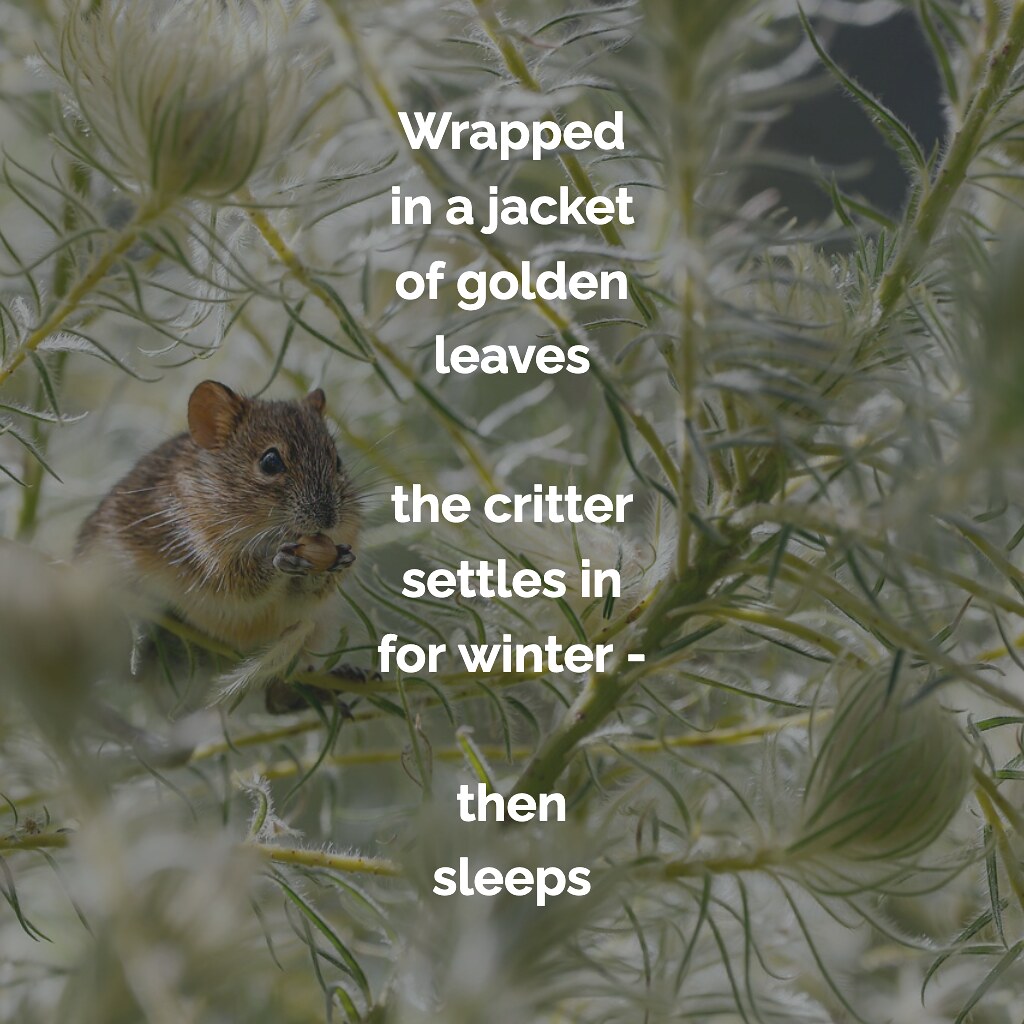 Here are three small poems from this week, as part of my morning “write a poem” routine (and don’t worry too much about editing and revision). These all come via one word prompts off Mastodon, and dovetail nicely into the start of the place-based, nature-themed Write Out project that kicks off tomorrow. 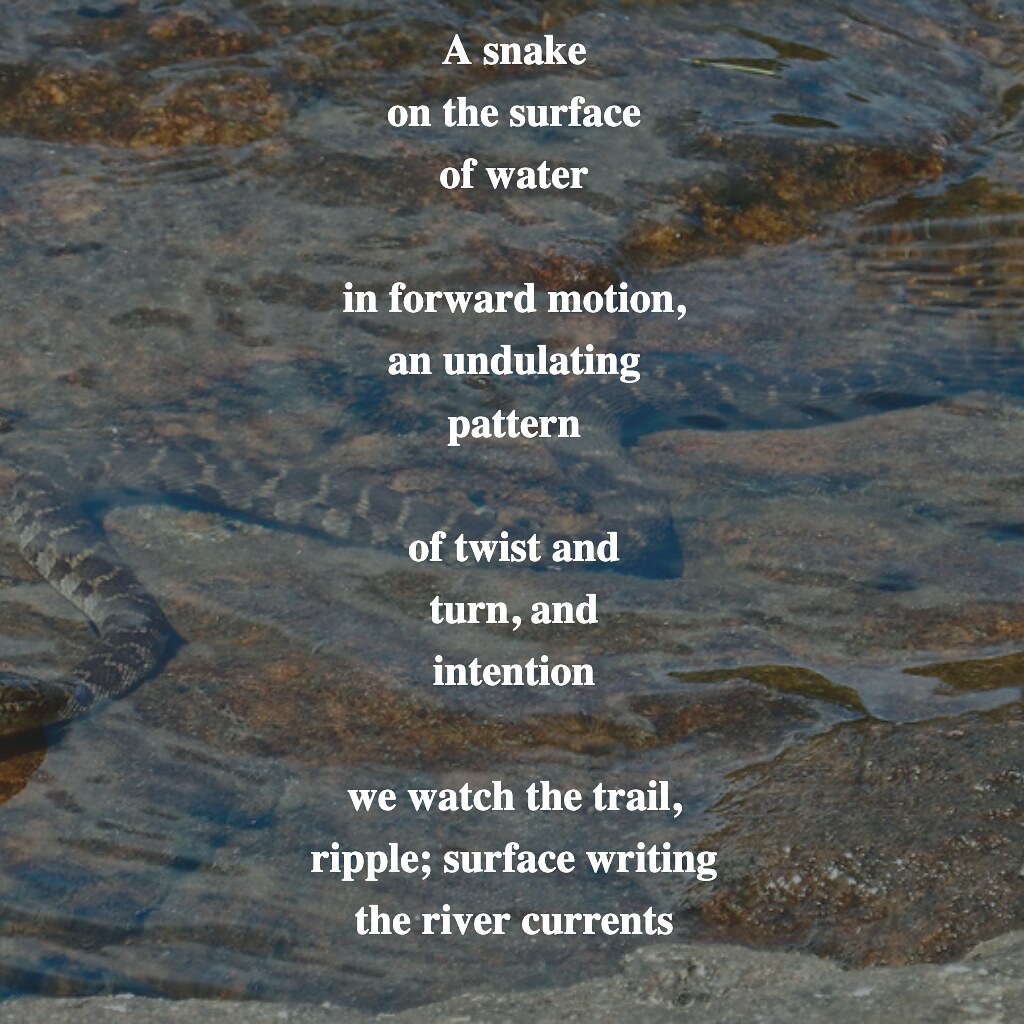 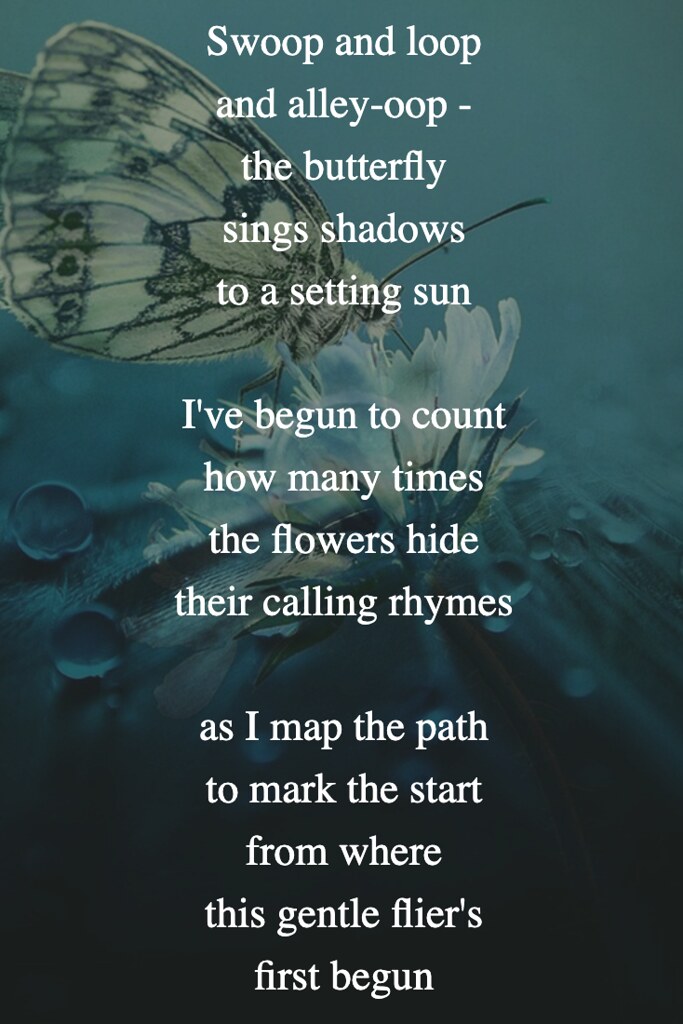 Page 8 of 674« First‹ Previous456789101112Next ›Last »
Thank you for visiting this online writing home. I am a sixth grade teacher and a teacher-consultant the Western Massachusetts Writing Project. This blog covers a lot of ground -- from teaching, to writing, to music, to art and beyond.