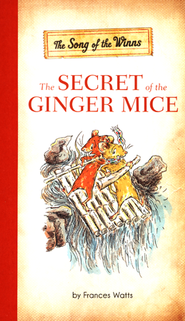 Now, here’s a book that my 8-year-old son and I chose from the library shelves for a read aloud based entirely on the cover: a watercolor illustration of two mice on a raft tumbling over a waterfall. Plus, the title intrigued us. The Secret of the Ginger Mice. We had a whole discussion about that word “ginger” and he guessed it had to do with ginger ale, the soda.

Well, not quite, but Frances Watts’ first installment in a series she is calling The Song of the Winns is a fast-paced adventure that tells the story of a mouse who gets kidnapped (perhaps), and then whose brother and sister set off to find him, only to run into trouble left and right. The book shifts back and forth between two different stories — that of the mouse who has disappeared, who begins making his way south to come home with a companion, and that of the siblings, who head north to rescue their brother. Plenty of cliffhangers ensue!

The larger story is that of a country that is in rebellion against a monarchy, and the mice kids’ family has some roots as rebels, although our protagonist mice — Alistair, Alice and Alex, plus a friend, Tibby Rose — don’t quite know that until near the end of the book after they are reunited, make their way home, and then realize that they are in danger and must leave again (just in time for book two). Oh, and ginger refers to the color of the fur of Alistair and Tibby Rose, and that shading is important to the larger context of the story, for reason I will not give away.

My son and I really did like this book, and it is a perfect read-aloud. Plenty of adventure (even pirates!), intrigue and mystery, and the weaving of the stories works nicely, too The use of mice as main characters connected us back to The Rats of NIHM and other stories, which was a nice connection to make. My only complaint is that as the designated reader-alouder person (!), I kept stumbling over the names Alice, Alex and Alistair when they were together (go ahead, read those three names fast a few times and tell me you aren’t stumbling, too. Hrumph).