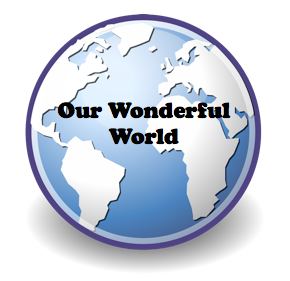 The last “Wonder of the World” poem for this month is the theme of “people.” Most days, I did not peek ahead to the themes coming up each day, and waited for Mary Lee Hahn to share her poem and inform us of the key word at A Year of Reading.  But one day last week, I did get an accidental peek at the last word on her list, and saw “people” and thought, hmmmm.

I decided I would try my hand at a “sound poem” in which I would use sound effects from FreeSound to layer in audio with the words and phrases of a poem I began writing.  I was trying to get at the strange connections we have to people around us — the good and the not-so-good — and make the poem “listenable.” I hope it works as I wanted it to work.

Take a listen to The Wonder of People.


The Wonder of People

Maniacs about some things;
passive with others;
and when you least expect it:
Friends
becoming
Family
becoming
Community
coming together.

A word here;
A word there;
Each sentiment tilts us on our axis,
and shapes our interactions
with everyone we meet;
wandering here, and there,
everywhere,
day in
and day out.

We share these footsteps
with the big wide World
in hopes that our thoughts and actions
might lock us in
and transform us all in ways
that connect us as
People walking these spaces
together.

Process Notes: I wrote the poem and revised it a few times, trying to get what I wanted to say in poetic form. Then, I identified key phrases that I wanted to layer in sounds. 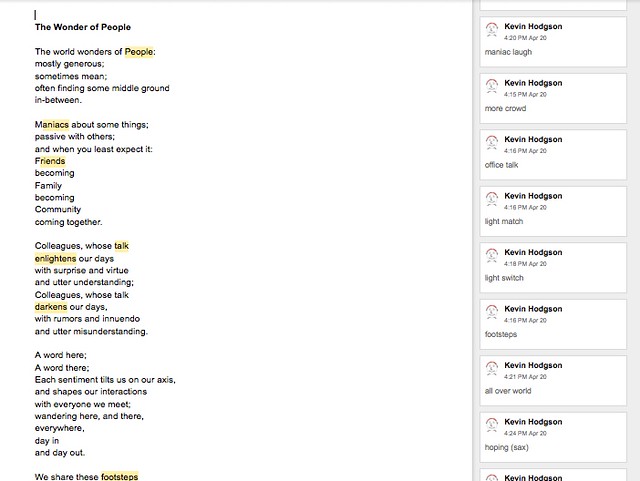 I then searched on FreeSound for what audio might work. Once I found something, I downloaded the file. I used Audacity to gather up the audio files together, and recorded the poem, moving and shifting the sound effects to the right places in the poem. 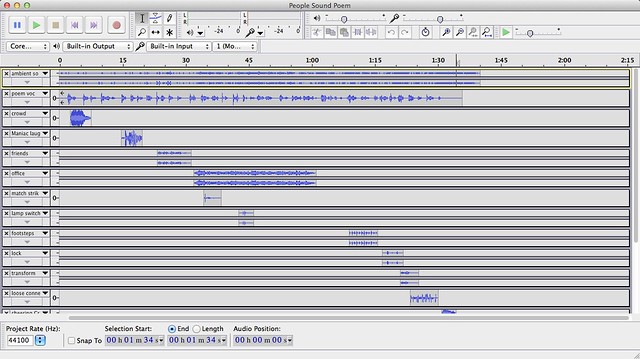 Finally, I mixed it together and shared it out on Soundcloud. Feel free to remix it, or use it for whatever might work for you.

Peace (in the found sounds),
Kevin