@dogtrax out of all the modalities you use to articulate your thoughts,what's your fave? writing, graphics, music, songwriting? curious…

Interesting question … and it feels like the 140 character limit on Twitter just won’t cut it. Or, it will cut it too short to respond with depth. Yin-Wah, if I think of which modality I most like to create in, it has to be songwriting. I do love the other kinds of creating — making comics, writing stories, remixing media. But there’s something about working on a song and music that pulls me in deeper than all of the others that I dabble in.

And I am not ever claiming that I am some professional songwriter, or ever will be, nor do I think that the songs I write will become the soundtrack of the world. It’s a personal thing, this songwriting that I do, although some songs do become used in the band I am in, Duke Rushmore. As I was writing this, I remembered once writing a post (I see, from 2009) entitled Why I Write Songs.

Just this week, I was working on a new song, perhaps for the band, and in a break in the writing (and even in breaks, my brain keeps working on lyrics and rhythm and parts …. when writing songs, I can’t turn it off), I found myself writing a second song. It emerged from an old scrap of a guitar riff, and then the first line came, and I found myself writing very quickly, this song of losing a friend, and in little time at all, I had the structure and the first verse and the chorus.

It’s odd how sometimes the writing flows like that, something coming out of nothing and utterly unexpected, Yin-Wah. So, for a few days, I found myself toggling between two new songs. For me, if I don’t play the song over and over, and over and over, I lose the nuance of it. I have to practice it into the ground (my poor family) to understand what the song is, and what the song is about. My fingers ache, Yin-Wah, from playing guitar so much this week.

But I can look at what I wrote, and hear it as I play it, and know: this is something worth keeping. That might mean just stuffing it away into my guitar case, or it might mean sharing it with my bandmates. I’m still unsure. Last month, I dug out a song that I write five years ago and never shared, and showed it to the band, and now we are working on it. You just never know. Songs are like messages in a bottle. The bobble on the surf of the mind.

Maybe you want to hear the demo of the song I have been writing about?

First, here is my lyric sheet. You probably can’t read much of it, Yin-Wah. I’m a word scratcher. But you can see the general ideas I was developing, the ways I identified rhyming and verses and choruses, and how one word gets changed, erased, changed again, returned to the original, changed again. I revise more with songs than I do with other writing. I admit it: I am terrible reviser. But with songwriting, every word is a rhythm, and every beat is important. 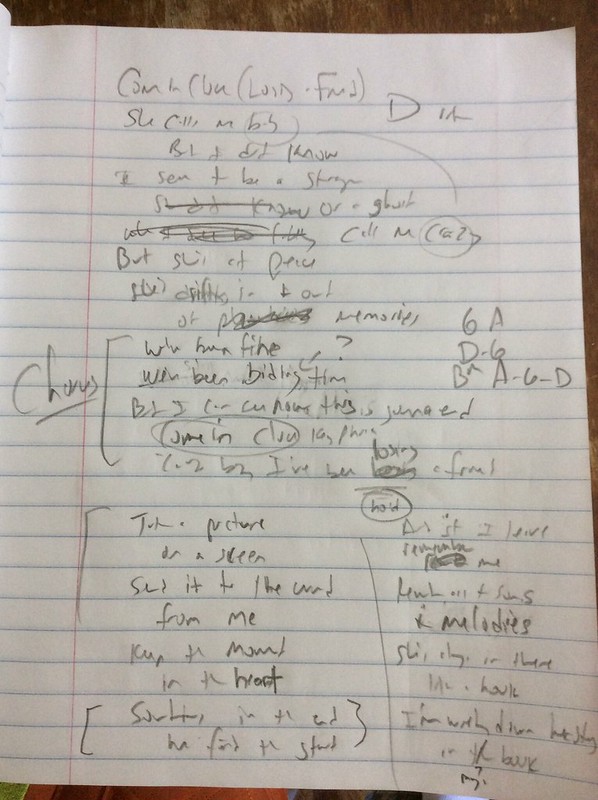 Here is a demo I recorded quickly yesterday. I hear the flubs. You may not.

Thank you for asking me about my writing. This is probably more than you expected, but in answering your Tweet, you gave me an excuse to be reflective. That’s a gift in and of itself.

Peace (in the muse you find),
Kevin