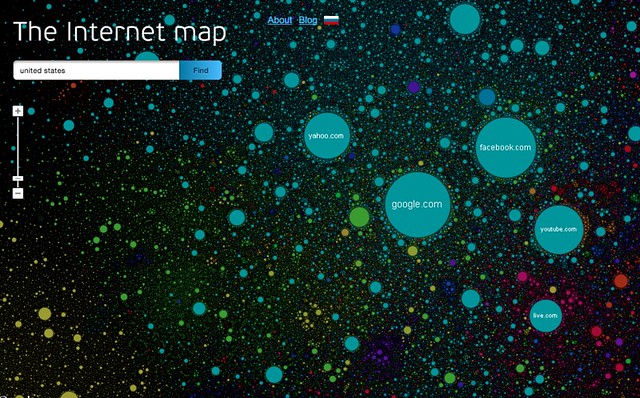 The Internet global network is a phenomenon of technological civilization, and its exceptional complexity surpasses anything mankind has ever created. In essence, what we are dealing with here is a huge quantity of utterly unstructured information. The Internet map is an attempt to look into the hidden structure of the network, fathom its colossal scale, and examine that which is impossible to understand from the bare figures of statistics.

The Internet Map is an interesting site that calculates the connections made of people moving between websites to create a visualization of the Internet. Sort of.

As the developer says:

The Internet map is a bi-dimensional presentation of links between websites on the Internet. Every site is a circle on the map, and its size is determined by website traffic, the larger the amount of traffic, the bigger the circle.

Use the search engine at the Internet Map to look up countries and you quickly notice a trend: Google is everywhere. Seriously, if we open up our definition of Public Space to include the Internet (which we should), then it becomes clear rather quickly how enormous a reach Google has on the world through our search engines.

What does it say about us that we let a private, for-profit company have such a hold on the public sphere? It says we (me, too) value speed and convenience over privacy and data protection. It says that most of don’t even recognize the changed world from this vantage point because we don’t take the time to see the world this way.

But if the Internet is a public domain, or if it should be, then we all need to do more to protect that space from the encroachment and control of private companies. Are governments up to the challenge? Not likely. That just means we, the people of the world — the People of the Internet — need to be more vigilant and informed about our elected officials. We need to ask questions about privacy and Internet freedoms and more.

I also came across an interesting chart in a post the other day. It is entitled “Where the Internet Lives.” While the focus of the piece was on the visualization of who has connectivity, I kept wondering about the opposite: who does NOT have connectivity and what does that mean for the future of those places? I’m not saying the world is turning on technology alone, but lack of access should be a major concern of all of us.