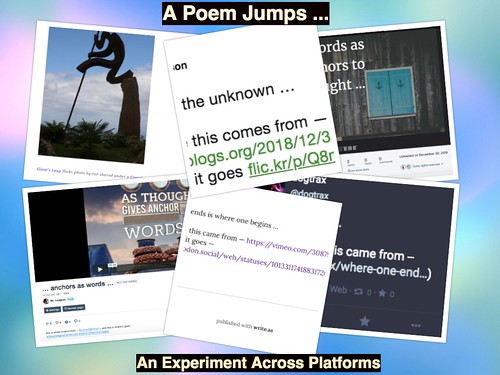 I am always intrigued by what happens to a piece of writing when it moves across different platforms. Sometimes, we use the term “transmedia” to describe a piece of media or writing that unfolds in different spaces, all in the service of a larger story. I’ve done different experiments myself with this, and have yet to be completely satisfied with the results.

As part of a continued conversation about digital writing and digital making with a bunch of online friends, I wanted to try to make a poem “jump” from space to space, allowing it to unfold in pieces. I used my own blog as the starting point and ended up over in Mastodon as my ending point, and in between, the poem moves from Flickr, to  Twitter, to Vimeo, to another writing blog space.

Here is the poem:

Sometimes, the links to move forward to the next line of the poem are in the comment bin. Sometimes, they are part of the post. I was not trying to be tricky with it. I wanted the path to be clear to anyone bothering to try to read the piece.

The most difficult part was coordinating the links to become live at nearly the same time, and it was sort of like setting up dominoes. If one piece with links wasn’t live, I could not have the link to connect with the previous and the next one. I worked backwards, and then sideways, re-posting some of the pieces a few times to ensure it all worked.

At one point in the poem’s construction, my plan was to have the path go through the comment bin of either Anna or Sheri’s blogs, but when I tried, I think they either have comments on moderation (which is understandable) or maybe my posts got sent to moderation (due to embedded links) and they were not visible, so I could not get the link I needed to keep the poem moving. I became impatient, not knowing if Sheri or Anna might even be around to see and release the comments. This become an invisible logjam.

I eventually went an alternative route (and reached out Sheri and Anna to let them know to ignore anything I had left behind), although I feel as I missed an opportunity to use another person’s comment area as part of the poem’s architecture. The poem would have been stronger by moving through other people’s posts, I think. This was a missed connection, so to speak.

What I wasn’t so successful at here, I think, is really harnessing more of the possibility of each platform in some way. I did make the Flickr jump visual and the Video is a video of word animation, but maybe I should have added an audio component, for example, and the Twitter jump might have been better with additional tags, spreading the poem further. The two blog jumps — here, at this blog, and at another, where I write poems — are just places with links (although I did add a visual to the first jump), and maybe finding a way to add an interactive element (of some sort) would have been interesting. Landing on Mastodon made sense for me, as I write small poems there every day with a few others, but you would not know that by the landing point.

Small projects like these are learning adventures, though. As a writer, I wonder how a piece can make that leap, in ways that allows platforms to inform and deepen the meaning of the words. As a teacher, I wonder how this might be taught in the classroom with young writers, and maybe .. why.

Here’s what I think as I mull on that last point — the why would one even bother to do this?  It becomes clear that in the process of doing this, you are forces to learn more about each platform as you consider its use as a jump point, that the considerations about possibilities make visible the limitations and the advantages of each platform space — and maybe open the door to unknown workarounds — that only surface when you see the collection of platforms as one larger compositional space, like an artist sees a canvas.