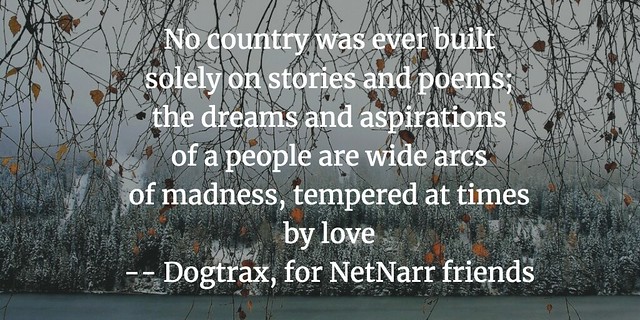 Through the course of the day yesterday, I wrote three different poems as gifts, inspired by our month-long Poetry Port adventure in the CLMOOC community, where folks are writing poems to daily themes, composing words as gifts to others, and requesting poems be written for them. (learn more)

The first poem, above, was written as a gift for the collective students in the Networked Narratives class, which I dip in and out of as an open participant. I went through and read a bunch of blog posts, in which they were examining Langston Hughe’s poem of Let America Be America Again, and thinking of its message in the modern day. The short poem is a reflection of what I read, and what I was thinking as I was reading, and leaving a trail of comments across the blogs. 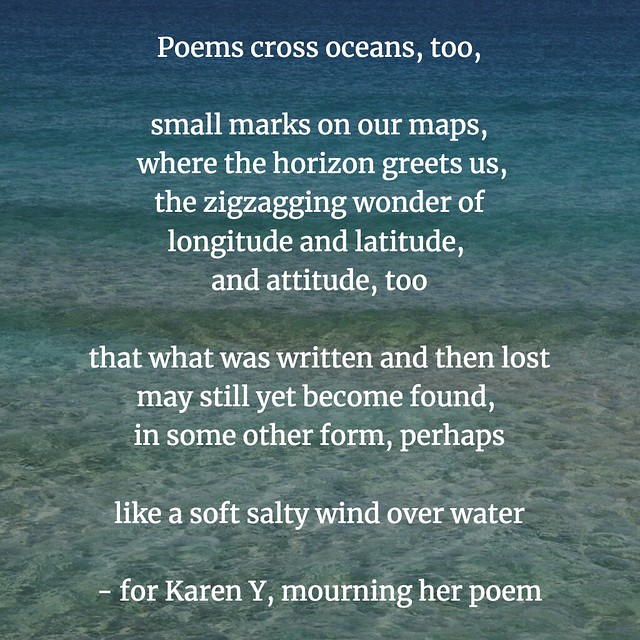 Next, my CLMOOC friend Karen Young, who has been traveling, wrote that she had written a poem for CLMOOC the day before, but it had somehow never got posted on her travels, and the poem was now lost in transit. The poem was a gift for her.

Finally, as preparation for an upcoming inquiry group with the National Writing Project called Grapple, with a focus on algorithms and learning, we were asked to do some pre-reading and some pre-viewing, and this video about having “blind faith” in neutral technology struck a nerve with me on the conflicted concepts of clear human bias in computer code, so I wrote this small poem for the facilitators of the inquiry, with the screenshot as reference point.

Meanwhile, I continue writing poems each day, using the CLMOOC calendar themes to inspire me.

Yesterday, the theme was Peace:

Meet me where
the river releases
eddies, small clusters
of currents over
roots and rocks,
where we’ll race our
fingers over water
of mountain glacial melt
and time’s perpetual tears,
where we’ll glide our fingers
over the swirling surface,
until the tension becomes
calm; the circles, smooth;
the place where
we practice peace

Today, the theme is Friendship:

The bracelet snaps
my attention; she points
and explains that she’s
the purple, and her companion,
the pink, the two of them
twined forever on her wrist,
twisted forever together
with fingers, in friendship;
all while she’s reminding me
of this in her quiet voice,
as if I had forgotten, but
I had not