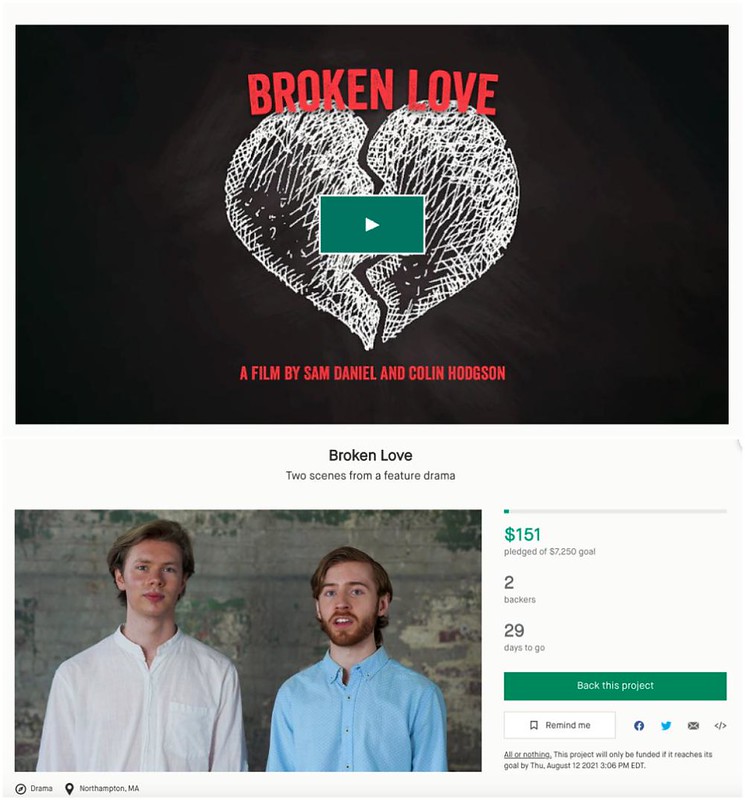 My eldest son – who works as a video editor and producer — and his childhood friend — who is in the final editing stages of his first novel — are making a movie.

They, and friends, have been making movies since they were small — all sorts of grand adventures around our neighborhood that still bring smiles to my face from the memories — and now they have written a feature film called “Broken Love” and are raising money to shoot two scenes, in hopes of pitching the film to investors down the line.

From their online pitch:

“Broken Love” tells the story of an escaped convict, Ethan, who returns to his hometown in Upstate New York to recover the $200,000 in dirty money he hid before his capture and to flee to Canada with his fiance, Jenny, and their young daughter. He returns, however, to find that two local thugs are after his money and that Jenny is now in a relationship with his childhood best friend, Todd, who also happens to be the policeman in charge of his recapture. It’s a drama inspired by the real-life escape from Dannemora prison in 2015 and also by emotionally-charged relationship films like Derek Cianfrance’s “Blue Valentine” and “The Place Beyond the Pines” as well as the darkly comedic crime thrillers of the Coen Brothers.

You should not feel under any obligation to donate but I feel the obligation (and pride) as the father of one of the filmmakers here to share their Kickstarter page in my network. I love that they are still collaborating after so many years and with different, but still creative, trajectories in their lives.

If you are interested, here is the link to the kickstarter campaign for “Broken Hearts.”