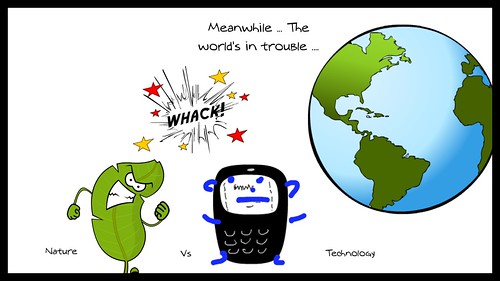 In game theory, the idea of dynamics is important. Change a variable in any game system, and the play changes along with it. You can make this theory visible for yourself by taking any familiar game, such as Chess or Monopoly, and adding or removing elements/pieces/rules. You quickly realize that while your knowledge of the game has some historic grounding, the changes now put into place add a wrinkle to the perception of play. The game becomes something new.

Which leads me to a bit of a ramble … I am participating in the 6.0 version of TvsZ, or what was known in previous iterations as Twitter vs. Zombies. It’s being run by some very good friends of mine as an offshoot of Digital Writing Month and as part of the grad (I think) classes they are teaching. I find that fascinating, extending the learning about literacy in the classroom to something like a Twitter-based game. Now, this particular TvsZ is not Twitter vs Zombies, as the organizers were wary of having fun with zombies in a time when Ebola and other epidemic crisis flash points face the global community.

Instead, the narrative of this Twitter game (yes, it all played on Twitter, with hashtags and alliances and media and more) is about finding a community aligned with either Technology or Nature to survive an apocalyptic moment in time, where you need to determine what is important and what is not. The game rules allows you to #recruit others and fend off recruitment. It’s a bit difficult to explain here and you might be shaking your head.

The game started mid-day yesterday and continues through the weekend. I popped in when I could during teaching breaks. As I played TvsZ here and there during the day and into the night, some trends I noticed had me thinking about past variations (see a past reflection on why I played Twitter vs. Zombies) and the updates now embedded in this version.

Here, then, are a few unfocused observations ….