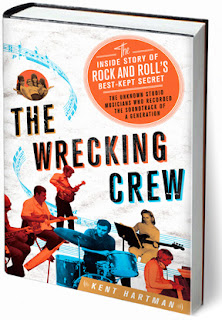 One of the secrets of the music recording industry is that for many years (and probably even into today), hired studio musicians often played the instruments on the tracks and we never knew. Nowadays, it is the producers providing samples and other layers of sound for singers to come in and lay down some vocals. But back when instruments were still played (dinosaur alert!), plenty of bands went into the studio, only to find that they could have left their guitars, bass and drums home.

The Wrecking Crew: The Inside Story of Rock and Roll’s Best-Kept Secret by Kent Hartman is an eye-opener narrative about the core of studio musicians in Los Angeles during the 1960s and the start of the 1970s who provided the soundtrack to most of the rock and pop songs that became the soundtrack for the era, including bands like The Byrds, Simon and Garfunkle, the Beach Boys and more. Anchored by legendary drummer Hal Blaine and guitarist/bassist Carol Kaye and others, The Wrecking Crew completely transformed the way music was recorded and then sold the public.

This inside look into the characters who made up that scene, and the entire music industry that formed around it, is intriguing, and it reminds me a bit of the documentary Standing in the Shadows of Motown, about the musicians in that studio known as The Funk Brothers who also played on just about every single hit coming out of Motown. It turns out that professional studio musicians were at just about every recording facility during that time period, cranking out hits while the artists were merely providing vocals.

The Wrecking Crew is a fun read and peels back the layer of how music used to get produced, and how we maybe should not quite trust our ears when we hear something on the radio.

Peace (in the studio),
Kevin