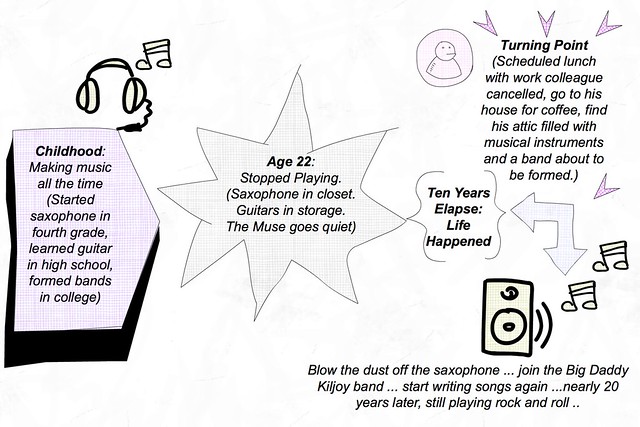 I’ve been in and out of the Walk My World Project a bit this year, following when I can and adding when I find time and inspiration. The most recent Learning Event for Walk My World has participants exploring “turning points” in their life — a time when that metaphorical fork was there and you made a choice (or had a choice a made for you).

I suppose Life is made up of these Turning Points, and all the “what ifs” that come with reflecting back. I chose a strange period in my life when the music in me went mostly silent. I had been playing my saxophone and guitar since childhood and teen years, but in my mid-20s, I packed them away.

That was for about 10 years.

I could probably point to all sorts of reasons, from the relationship I was in at the time, to the cramped apartment I was living in, to the confusion about the present and the future, to …. maybe I was just tired of music at that point. Maybe all of the above, with a little swirling action to stir the mix.

What changed that — what became my turning point — was a chance lunch. A colleague at the newspaper where I was working as a journalist was leaving the office to become a self-employed editor, and before he left, I suggested we have lunch. On the day of our lunch, he wasn’t feeling great, but he invited me to his house for coffee. I agreed, and we were hanging out when he brought me up to his “office” in the attic.

There, beyond his office area, was an attic full of musical instruments: guitars, bass, keyboard, amplifiers, drums. It was the outline of a band, and it turns out (unknown to either of us) that he was not only a musician, but he was also in the midst of starting a new band. When he found out I once played saxophone, he asked if I wanted to jam.

The rest is history … I did jam and he and I and the drummer have now been playing in various bands for nearly 20 years (we’re in the midst of reforming yet another new band right now as our Duke Rushmore band fell apart last year).

I am grateful for that particularly turning point, because it reminded me of what I loved about making music, and about writing songs, and about playing my saxophone, and about life, too, being more than work and family (though, of course, that is very important) and about having something just of your own.

I’ll never be a professional musician — I not good enough nor am I dedicated enough, and I have long been at peace with that — but I can’t imagine life without it, either. It’s odd now to think of that ten year gap — as if it were another false life being lived at the time, as if I didn’t know who I was or what I was doing.

Peace (in the Muse),
Kevin