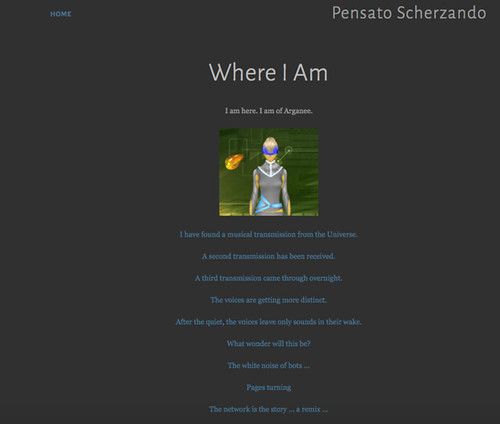 As Networked Narratives hits the last lap this week (it has been an interesting exploration of digital narratives, with a graduate class at Kean University and a bunch of folks, like me, out here in the open), I want to reflect on a project that took hold in the last weeks of NetNarr.

Specifically, the invention of an alternative, or mirrored, Self in the NetNarr world called Arganee. When I say “World,” I want to be clear that we never did enter or create a real fictional world – like video games do, for example — but one of creative imagination, through an online portal into Arganee. (Essentially, a blog site with hidden doors and strange text features). We imagined it a world.

Our task was to create an alternative personality for the Arganee World, and after some thought, I created a character called Pensato Scherzando. Both words in the name are musical terms, which come together to create a definition of “imaginary music created, playfully.” Or something like that. Music. Play. Imagination.

We created a “home” in the Arganee World site, and created a Twitter account for our characters, and our health and growth was tracked based on interactions with others and how much writing and media making we ended up doing. I also created an alternative home elsewhere, as a collection point for media files.

Prompts encouraged collaboration (although I never really found a place to collaborate) and connection, and the overall theme of Civic Imagination and Social Activism (through World Building) emerged in the final days.

I found it intriguing to invent a persona out of the blue, and although I had some ideas for her, the voice of my Pensato emerged rather on its own.

Pensato became a collector of sounds, a remixer, whose Sound Collector Array is pointed to the Universe, seeking music and messages from somewhere “out there” in hopes of some larger understanding of the world(s). I tried to infuse her speech with metaphysical tics, always urging her readers to “listen” to the Universe.

Pensato is a collector, a poet, an interactor, an actor on the virtual stage, an optimist with hope that there are ways to mend the fabric of the world(s), if only we pause and listen and help each other.

I went about creating audio files from the Universe that Pensato could share out (I don’t know if anyone was really listening, though).

My aim was to find ways to create music and mystery, never quite giving away what Pensato was hearing. I wish I had had some master plan that would have ended in some symphonic conclusion but alas, I was winging it.

Her voice was my voice, but not yet my voice. She became herself, or at least some projection of what I hope we could all become if we just took the time to pay attention to each other. Listening requires attention.

We don’t listen nearly enough. Pensato did, or does. For a final assignment, she wrote me a letter. You can read it, too.

PS – Special thanks to professors Mia Zamora and Alan Levine for inviting us to join the graduate students on this adventure.