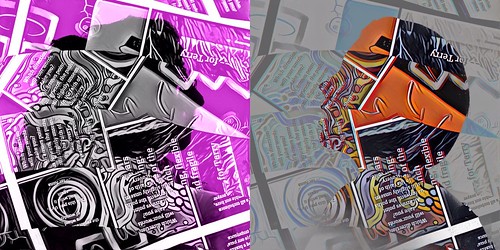 The image above seeks to represent a complicated idea — the merging of digital writing … through image. As part of a new push to explore Digital Writing (via the hashtag #MoDigiWriMo), I asked folks to share a wordless image to capture their view on digital writing. I know, strange, right? I then used the shared images from Terry, Wendy, Anna and Sheri to craft small poems, and then short musical interpretations of the image.

The final photo here is an attempt to merge all of the image/poems together, with a message of wonder and listening. I am happy with how the image came out, complicated as it was to create, and, as part of the MoDigiWriMo philosophy of sharing process notes of making art, this is how I went about it (mostly on my iPad):

1. Image to poem via Pablo extension

I also began wondering if I could (but never wondered if I should) remix the four musical interpretations into one single composition, knowing the juxtaposition of sounds would be strange, weird, and challenging. I did it anyway, using Soundtrap as my mixing tool, creating this layered cake of sounds.

The result is odd and disjointing, yet I find it intriguing (more so with headphones, where the shared landscapes are more likely to emerge). The one track that initially seemed out of sync was Sheri’s, so I ended up dividing it into smaller pieces, shifting it around as layers, finding the nooks and crannies for it.

There are moments of confusion in the track. But there are also moments of melodic and harmonic symmetry, where each piece seems to fall into the others. Sort of like how we write sometimes, digitally.