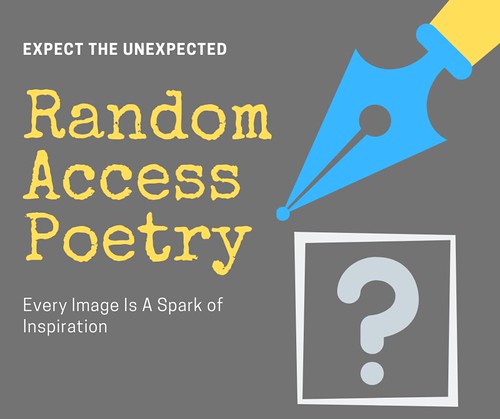 During April, every day, I woke up, not knowing what I was going to write. As part of my Random Access Poetry activity, my goal was to use a few different tools and sites to find an unexpected image that could spark a poem for the day. So, for 30 mornings, that’s what I would do — grab a cup of coffee, go to one of my image-finding spaces, land on an image and write small poems.

Here are some of the places I went to for random photo inspiration:

Looking back over the 30 poems from April, there were some decent writing days, more than a few mediocre days and a couple of blah days with the poems. Some poems just worked and some poems just didn’t. Some poems seemed to write themselves — I would start and the lines would flow, and I’d try to figure out where the poem was going as it was being written. That’s an awfully strange and interesting experience. Other days, I’d get stuck mid-way into the piece, force myself to plow through and get to a good-enough stopping place.

What I found, as I was about to start writing each morning by calling up a photo with one of the tools above, is that I was searching for a hook in the visual image — something that grabbed my attention, a spark of a hidden story, or a character on the edges, or a small moment, or an emotion. I didn’t know what I was looking for as I was looking but I was fairly confident I might find it if I looked close enough with my writing eyes. Only once or twice did I not use the very first image I found and reset the process. Mostly, I let the random nature of my search become the inspiration, and just went with it.

The thing about poems is that they are designed to evoke, and photos can do the same. Evocation is also a tricky business for a writer in a rush — I wrote poems in a short span of time — and that’s why they don’t always work in this format. There was often a tension between what I saw, what I wrote, and what I aimed to accomplish. But I often left the writing with a phrase or line or stanza on the screen that I found worthy of the page, and for that, I was always inspired and confident as a poet.

If you bothered to read any of the poems, thank you. I hope you were writing, too.

Peace (in poems and more),
Kevin