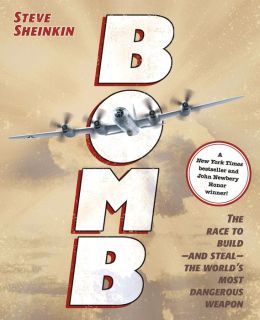 I have to admit: I was somewhat familiar with the making of the first Atomic Bomb but I did not know how much spying, sleuthing and Cold War calculations went into the push during World War II to build the bomb that forever changed the world after the United States dropped the results of scientific discovery on Japan. Bomb: The Race to Build — and Steal — the World’s Most Dangerous Weapon by Steve Sheinkin came to me for free from the Scholastic Book Club (thank you!) just as a colleague was asking me if I had ever read the book.

That is enough of a kismet moment for me to read something. This oversized book for upper middle and high school students has a fast-paced narrative that begins with the discovery of a Soviet spy in our midst and ends with both regret and relief that the Atomic Bomb did what it was meant to do — end World War II. It also began the arms race that has forever put the entire world on edge, even as the Cold War thawed. Look to Iran and North Korea, and Pakistan, and beyond for evidence of how the work at Alamos made us all see the world in a different light.

In Bomb, Sheinkin does not shy away from this lens, although much of the non-fiction narrative is geared towards the race that the American scientists were in against their counterparts in the Soviet Union (ostensible, allies, but not to be trusted) and the Nazi Regime in Germany, where all indications were that Hitler was determined to build and use the first Atomic Bomb. Military efforts to slow down the Germans, kidnap their scientists, and beat them to the bomb, while stalling the Soviets and their own spy networks here in the United States, became a dangerous game of cat and mouse.

Even knowing how the story ends — with hundreds of thousands of Japanese civilians killed in an instant and a legacy of fallout and radiation for generations to come — Bomb keeps up the pace, which should help keep readers involved in the story that has significant historical value, of only to question science in the corner of the military apparatuses of governments.