With the theme of light this week at the Making Learning Connected MOOC, I have launched an invitation to people to help me create a new set of constellations, and origin stories, in the night sky by opening up four “star charts” that I have created in Google Drawing.

Anyone can come on in and add some star clusters and then write a short origin story. I hadn’t thought about it until Amy did it, but adding the story right into the Google Drawing as a comment makes great sense. I wrote out instructions and the four star charts (north, south, east, west) are open and editable by anyone.

Or go to the charts:

You come, too. Add some stars. Make a constellation. Write your story. Collaborate with points of light. 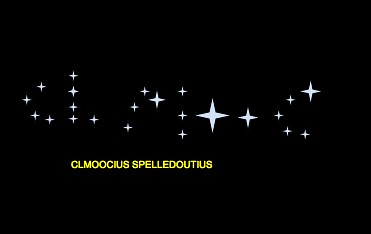 In the north sky, in mid July of 2014, the giant Makers of the Universe gathered together and noticed that on the small planet below, the Earthians had relied so much on consuming that they had forgotten creating. The Makers of the Universe decided to send a sign to the Earthians, something to help them remember that their hands were designed to make things and their minds were designed to invent things and solve problems, and the #CLMOOC constellation was born. The Makers of the Universe moved the stars into a cluster, confident that with the light of the CLMOOC shining down on the planet, a movement would be born and inspiration would be found. And it was so.

Peace (in the sky),
Kevin