(This post is part of the regular Slice of Life series over at Two Writing Teachers.) 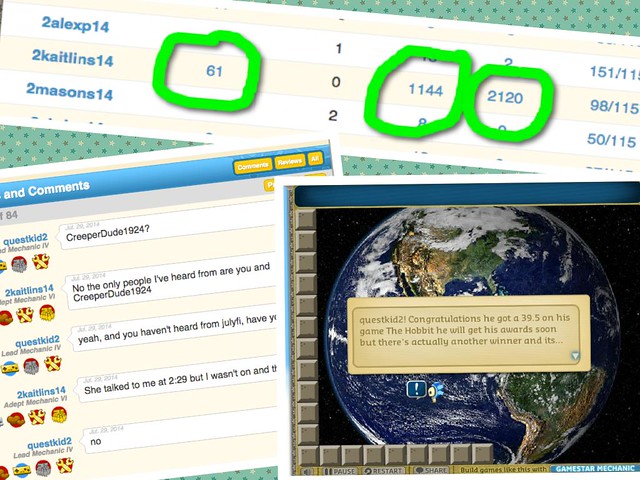 Yesterday, my sixth graders all set up and started using their new accounts in Gamestar Mechanic as we gear up for a Video Game Design unit in which they will be designing, building and publishing video games to show knowledge of cellular structure. I’ll write about that another day …

But as I was getting ready to invite this year’s sixth graders into our “classroom” on Gamestar, I began weeding some former students out. I let them stay in the premium space until I need their slots for my classroom account, and then I boot them out. They all know this, so it won’t be a surprise, and they don’t lose their work. They just lose their premium status (unless they want to pay Gamestar). As I was removing students, I noticed something that caught my eye.

One of my students had not only created 61 video games, she had also reviewed 1,140 games of other players and left 2,120 comments on other people’s games. Now, that’s a lot, and I wondered what was going on with her since she left our school last June. I know she loved the site, and that she is very social by nature, but even for her, this amount of activity seemed excessive.

So, I trolled her account a bit, checking out her games, and it turns out, she was up to something very interesting. Throughout the summer, she had been constructing an informal network of other gaming kids to create a series of game design challenges, using the comment box/review box features for the games to organize the network of other kids. They would plan “meet” times in Gamestar, and then leave a thread of comments as they planned out the next activity, and then go through a voting system, and then announce the winners with a published game. They “followed” each other to keep track of the activity.

On one hand, this is the most inefficient system to do this kind of community building. The site is just not built for this. On the other hand, I am so proud of her for hacking the system to make it work for her, to some degree, and for constructing this whole framework of young gamers in Gamestar Mechanic. Reading through just some of the comment threads (there is no way I can get through 2,000 of them), I can see these kids navigating what it means to write in online spaces and using media to create things together and to find common ground among interests.

All of this … on their own, completely outside of the radar of any adults, as far as I know. I only stumbled upon it accidentally. Needless to say, I did NOT bump HER from my classroom account. I’m going to give her the room she needs to do what she’s doing, and see where it takes her.