If you know me at all, you may know that my sons are HUGE fans of baseball. In fact, two of them are still playing summer baseball even after the spring baseball season ended. They play, and my wife and I watch, a lot of baseball. And we love it. 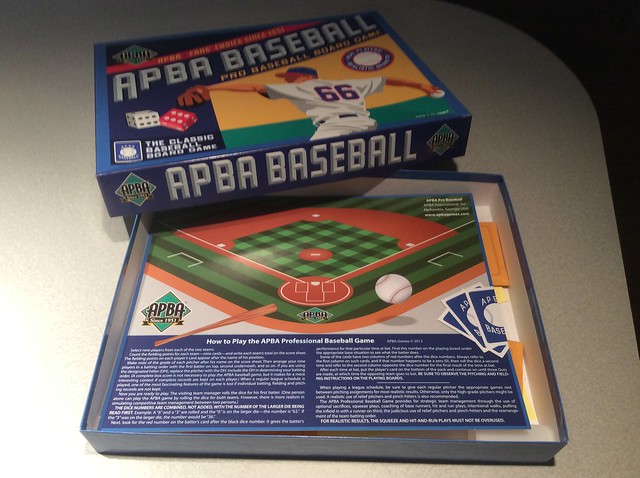 Recently, another parent of a little leaguer told me about a board game for baseball that is built on a complex system of stats of players. As my sons also collect baseball cards and invent their own games using the stats (still the best kind of game), I decided to get the APBA Baseball set. It was a bit costly (about 4o bucks) but I figured (or hoped) it would be worth it.

It is, for us. My kids love this game, and two of my sons and I have spent the last few days engaged in a modified baseball World Series of sorts, with a round robin series of play. I oversaw the LA Dodgers. Another son managed the Red Sox. The third, the Cardinals. My youngest son won the tournament yesterday. I took a series of images of our days of play:

I bring this up because the Making Learning Connected MOOC is engaged in considering games and systems for this week’s Make Cycle, and while most of us are engaged in the “game” part of things, it is actually the “systems” part of things that is most interesting, particularly from a learning perspective.

Systems thinking is concerned with the overall design of an experience (a game, or a business, or a production line, etc.) and how every single part in the system has a role in determining the various possible outcomes. So, if one element of the system gets tweaked or changed, it has a ripple effect down the line (sort of like that famous candy scene in I Love Lucy).

In game design, systems thinking is a core philosophy. Either the game designer changes elements as part of the iterative (or revision) process, to improve the game (think of all of those updates you get for your apps on your mobile devices) or they build potential changes into the gameplay itself, allowing the player to make choices and thus, affect the outcome of the game. If you think of that idea for a second, you quickly realize how complex the job of a game designer is.

Here is how the Make Cycle leaders put it in their newsletter announcement:

The systems within which we operate can be difficult to understand – and even more so, difficult to discuss. Games – in all their forms – are engaging tools for experimentation. As dynamic and interactive works of art, games can inspire us to tackle and engage with complexity. Plus, games, and the ways in which they are designed, enable us to experiment and have fun with failure: the ability to try, fail, and try again is a powerful tool.

I also wrote a bit about this systems thinking when reviewing the book Gaming the System, which is part of a series of excellent teaching resources around system thinking for the classroom. This quote still resonates with me:

A game can be considered a system because how the game is played and how the game play unfolds are the results of multiple interactions among different components … It’s important to be able to reflect not only on how a system might be functioning currently, but also on how a designer might have intended it to operate (or intended to change it). — page 200-201, Gaming the System

When my sons and I first opened up the APBA Baseball game, we were dumbfounded by how complex the game was. Page after page of how each “at bat” is impacted by stats, the roll of dice, the strength of the opposing pitcher …. all meant fairly replicate the actual play of a baseball game. After taking a breath, we dove into the rules, taking it step by step and then we did what you need to do when faced with a complex gaming system: we played the game, and learned as we went along. We made adjustments to our play.

There are still some elements we know we need to learn about: base running options, injuries to players, when best to pull and replace pitchers, etc. The system is complex and that complexity keeps drawing us in. If the system were simple, we’d be bored and I would be mad at spending $40 on the game. But we are still figuring out this system of board game baseball, and we’re almost ready for another world series of play.

Peace (in the system of thinking),
Kevin