(This is for Slice of Life, a weekly writing activity hosted by Two Writing Teachers. Come write.)

I am in the midst of reading the autobiography of Elvis Costello. The book is called Unfaithful Music and Disappearing Ink (a title I like very much) and it packs a literary punch and becomes a musical journey through Elvis Costello’s songwriting and life, with plenty of meandering along the way. Yesterday, during part of a Snow Day from school, I read with interest the section about Costello’s collaborations with Paul McCartney.

There was a time when I was deeply into Costello, and the album, Spike, was a favorite cassette in my car. The album had the radio hit — Veronica — on it, and in the book, Costello connects the song that he and McCartney wrote to his grandmother, suffering from Alzheimer’s in old age.

I had one of those strange moments, realizing that it was that song by Costello — Veronica — that led me to write a song myself long ago with my old band, The Roadbowlers, called Inside Mary’s Pocket, which is about my own great-grandmother in old age. Or rather, the song is sort of built off memories of her. It’s interesting that I only realize that now how influenced I was, as I am reading Costello talking about songwriting, and that I did not realize then what I was doing. (or conveniently forgot.) It’s also interesting how Costello talks openly of reworking Motown chords and lines and grooves for his early albums. I guess we all gather what we can find. 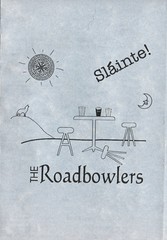 Of course, my song is nothing like his (I could only wish). I recorded this track more than 20 years ago now (dang!) on an old four-track. But I still have the Mp3 of our recording, and so I spent part of yesterday tracking it down in my computer files. Here goes …

Peace (in the songs of our memories),
Kevin