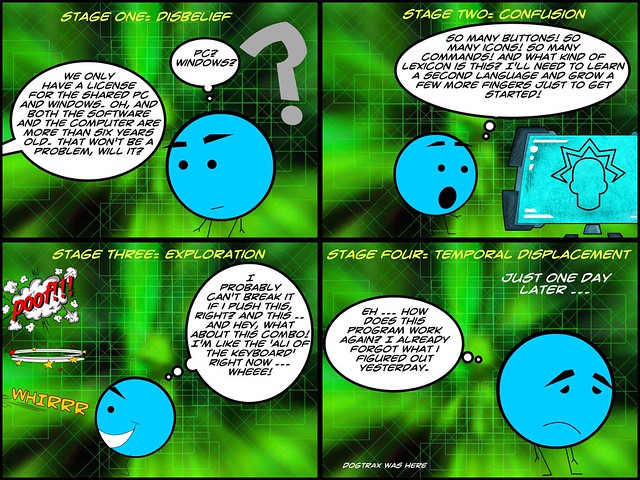 In my new role with the Western Massachusetts Writing Project (I guess I haven’t written about that yet .. will do later), I have been tasked with putting together our twice-yearly newsletter of events and activities for our writing project. I’m fine with that job. I like to write and share and connect. But the WMWP newsletter is created (for now, anyway) with a certain software program loaded on a specific WMWP laptop, and now that I have both computer and program in my hands, I’ve realized that learning a complicated piece of technology is … well … complicated.

As I was diving into the software this week to immerse myself in its inner workings, I realized I was going through some stages of “new technology” immersion. It began when I realized I would have be venturing back into an aging PC, as opposed to my Mac, and continued when I opened the software program up and saw dozens upon dozens of keys and buttons and options, all written in some language that didn’t make sense to my brain. Many, many bells and whistles.

Then, as I am apt to do, I just dove in, starting clicking things and working in the space, seeing what I could figure out as I went along. I’d get frustrated, try something else, get it working, hit another dead-end, try to find information help online, go back in, try again, and keep going. There were periodic little successes that at least allowed me to push forward with some limited sense of accomplishment.

For example, all I wanted to do was find a way to replace a photo. (apparently, that is done by “pointing” and that took me nearly 30 minutes to figure that out). And then I wanted a quick way to “preview” the newsletter I was creating, out of edit mode. I’m still searching for how to do that, believe it or not. It must be me, right? Where’s the big fat “This is What It Looks Like” button?

The next day? I had mostly forgotten what I had done the day before and how I had done it. A pitfall of diving in and not being methodical with new technology is the lack of clear paths and archival maps for the return journey. I didn’t document my dive in because there was never any method to the madness.

So, I began all over again.

The comic is just another way for me to deal with the feeling of frustration. I know I will figure out what I need to know (I already know more than I did just a few days ago), and I know I will turn to those within the writing project who have used the program for tips of the trade. It will all work out.

But I also know that I follow a certain pattern when it comes to new technology, and I hope that by making my own thinking somewhat visible — with a bit of humor — it shows me a bit more clearly how my own students learn when they come up against new technology. And if I can better understand that process, perhaps I can be a better teacher.

Let’s face it — no one reads the manual.

Peace (it’s in there, somewhere),
Kevin