I’ve been part of the Networked Narratives “course” as an open learner (there is a real course happening at Keane University, with professors Mia Zamora and Alan Levine, and open folks like me are satellites), and each day, there is a daily digital prompt called The Daily Arganee. It’s built off the DS106 Daily Create (I do those, too) and I love the daily challenges.

When the Networked Narratives was in planning stages, and Mia and Alan were talking about creating alternative personas for online interactions, I decided to dust off two comic characters from a previous project: The Internet Kid and the Horse with No Name. I wasn’t sure how two characters from the Wild West would work, but I was happy to see them again, after nearly a year of quiet. 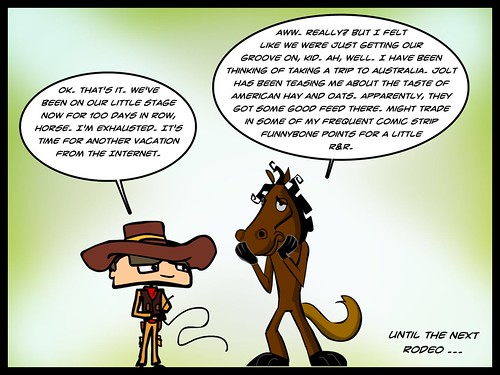 Every day, for 100 days, I put Kid and Horse into a comic riffing off the Daily Arganee idea, and it was a blast. But now that the NetNarr course is moving into new direction, with worldbuilding and game playing, I have decided that the Kid and Horse need a rest, so today’s comic is the final one (for now).

I had imagined I would be doing more storytelling, unfolding in comics over many days, but it turns out, I got caught up in the one-off comic from the daily inspiration. That’s not bad, but not quite what I had hoped. I did one stretch of comics as story, of the Kid and Horse rescuing the NetNarr World from the Digital Alchemist, releasing the comics slowly over a single Saturday, and have done other assorted Kid/Horse comics in the last few months.

I have not had all that much reaction to the comics — a few re-shares and hearts and reaction from a small circle of friends on Twitter, plus one cool imaginary cow friend from Australia — so I settled into the mindset of, I’m writing this comic for my own amusement. You know, that worked. I was amused.

Not every comic worked as humor every day, and more than a few rely on the context of the Digital Arganee prompt. They might be headscratchers out of context. I purposely did not spend much time on them — I read the prompt, opened up my comic app, went with whatever strange idea bubbled up in my mind, made the comic, send it to Twitter/Tumblr and moved on. Seriously, some days, that process took me all of 15 minutes.

I am sure the Internet Kid and the Horse with No Name will return for some future project. For now, after more than 100 comics, they have earned their rest, and apparently, Horse is booking a flight to Australia to see his friend, Jolt, another animal pal in the Networked Narrative atmosphere with a bit of attitude and enlightenment. Even imaginary characters can connect.

Some other day, I’ll be sharing out all of the comics I made during this part of the Networked Narratives course. Given the quantity, it might just be a Flickr Album or something simple. Last time around, I created an ebook as an archive.

You can also view the Tumblr site where I shared every day. It’s also archived with the original comics from Western106, where Kid and Horse were first born.