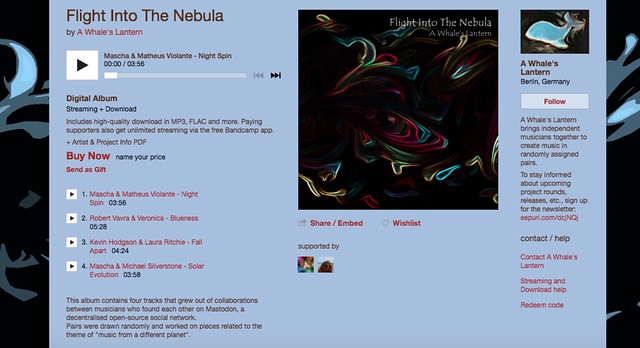 For the last six months or so, I have been writing in and exploring around Mastodon, a federated social networking space that is free from corporate structure. Federated means there is no one central server or space where people are located. Instead, there are “instances” where people connect to and write from (instances are hosted by individuals and most instances have a theme). All instances can share across the larger Mastodon network. I know that will sound confusing. Upshot for me: it’s becoming a neat, creative, connected space that is more than just an alternative to Twitter.

In late September, someone in the Mastodon timeline put out a call for musicians to collaborate together for an album project.  They hoped to leverage the connected element of common interests into a music project. I took the plunge, and became part of what is now known as A Whale’s Lantern project — a collaboration of musicians who have made music through the Mastodon network.

While I didn’t know who I would be partnered with, as names were drawn randomly, it turns out I was paired with a friend from other connected spaces: Laura Ritchie. She’s a cellist and music teacher and wide-range thinker.

Yesterday, our “album” was released on Bandcamp. Laura and I worked on a song that I wrote called I Fall Apart (Like Stars in the Night) and the whole group of us, including some of who didn’t get time to finish their collaboration, are in the midst of writing up our reflections. Collaboratively, of course, and hopefully, it will be published in a Mastodon open journal called Kintsugi in the future.

Check out A Whale’s Lantern: Flight into the Nebula.

Peace (listening to the muse),
Kevin