I know numbers are not everything. But some events still require a little celebration, right? Yesterday, during the Slice of Life, Chris posted a comment about my interaction with a student, and her comment became the 10,000th comment at Kevin’s Meandering Mind.

It’s funny because I kept checking in all morning to see if I would reach 10,000 during the morning, after posting my Slice of Life. I knew it would happen because the Slice of Life group is one that regularly reads and comments on Tuesday mornings.

I just didn’t know who it would be or when it would be. Thank you, Chris, for being the one.

I’m still staggered by that number, though. Ten thousand comments. That’s … like, a whole city of comments. A book could be made of the comments here. Pretty cool to consider.

I went back and searched my blog for the very first person to comment here and I found it was Will Richardson on July 27 2006. Will being the first commenter is sort of symbolic in a way because Will’s work early on with blogs, and wikis, and podcasts, helped inspire me to dive in with wonder when I first started blogging as a teacher (this blog came as a result of conversations and work with National Writing Project friends in a Tech Matters retreat in Chico, California, and I still have many close friends from that retreat.)

I went into the Wayback Machine to look for my blog in 2006. 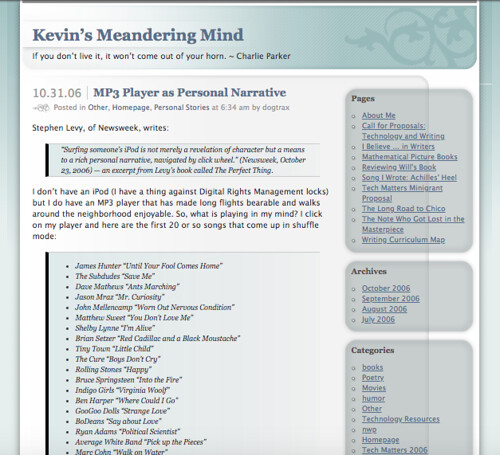 I am grateful that people still bother to read blogs (now and then, but not as often as it once was, alas) and that they even bother to read mine, and then, take the time to leave comments. It makes blogging feel more like a public act of writing, as opposed to a private notebook posted for others to look at. I wish I were better at using comments to start larger conversations.

Certainly, social media platforms have overtaken blogging in many ways. People (and not just the young kids) are more apt to use Facebook, Twitter, Instagram, Snapchat, Tumblr (sort of a blog), and more, and the decline of RSS readers (I still use one) as a way to gather aggregated feeds from blogging writers and educators is less a reading experience for many. Blogging isn’t dead, not by a long shot, but it has faded a bit into the busy background of the social media landscape.

Peace (making note of it),
Kevin