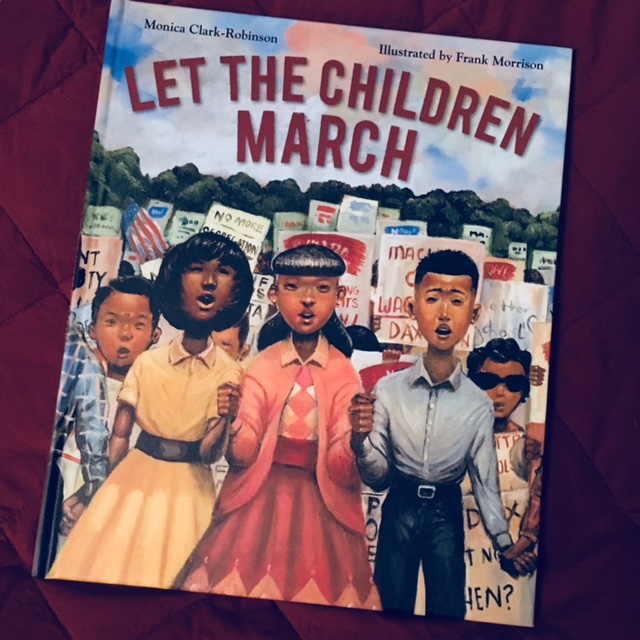 One of the many topics that come up when I read Christopher Paul Curtis’ novel The Watsons Go to Birmingham 1963 is the role of young people in the civil rights movement. Although the novel never references the Birmingham Children’s Crusade, the movie adaptation does, through the memory of some cousins of the Watson children, and so we spend time discussing how young people took the streets in protest, were attacked by police with fire canons and dogs, and were sent to jail by the hundreds.

Let The Children March, a picture book by author Monica Clark-Robinson and illustrator Frank Morrison is a powerful text companion to those discussions. With brilliant visuals and an engaging story (plus, a valuable timeline of 1963 in Alabama during the Civil Rights era), the book brings to the surface the courage of the kids who took to the streets, the wariness and worry of the parents who allowed the march (code-named D Day and Double D Day) to happen, and the movement leaders who accepted that children being arrested would create tension for the Kennedy White House to finally act against segregation.

The picture book centers on a narrator voice of a child who takes part in the Birmingham Children’s Crusade, but it more of a universal voice, advocating for change against unjust rules and putting the self in danger to force confrontation against a police force that was part of the problem, not the solution.

I appreciate how Let The Children March gives those young marchers a voice, and also, explores the results of the march (which the scenes in the Watsons movie does not do because of the time frame). President Kennedy did get involved after getting pressure from the country and the world. Birmingham did end official segregation (if not racial violence, as the bombing of the church that forms the center of the Watsons novel shows. Change happened, even if the results of those actions are still something we continue to reckon with as a country. Peace (for all),
Kevin