You know that moment when you introduce an entirely new concept to your students, and even as you are watching their eyes take in the new information, you can see the wheels turning in their heads as they process it all? That was me and that was them, yesterday, as I began a mini-unit around Interactive Fiction (sometimes known as Choose Your Own Ending stories).

We began with a discussion about its basic elements — reader in charge of story, multiple narrative paths, use of second person narrative point of view, story maps, etc.) 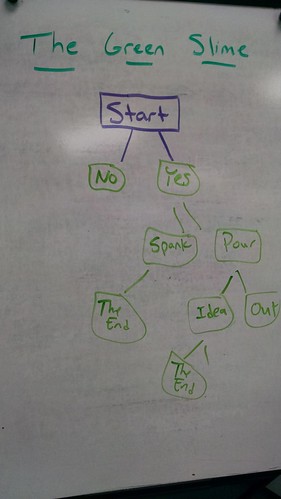 And then I read a book out loud called The Green Slime, allowing the entire classroom to act as “reader,” making “choices” along the way about where the story should go. Funny, each of my four classes took four different narrative routes, so each time I read the story, it was different experience for me.

I mapped out the different “branches” of the story as I read, showing them a visual of where we had been, and making note that they would be doing this kind of mapping, too, but from the writing standpoint, with every possible choice for the reader made visible.

Oh, they were pretty excited. Only a few had ever even seen these kinds of books, although some of my gamer’s make quick connections to the ways that video games use the same techniques. In the next days, we will be doing some writing and then some deeper reading and mapping of these books, and then move into a larger project using Google Slides as a launching point for Interactive Fiction, where hyperlinks become the way a reader “jumps” through the decision trees.