Another Nathan Hale’s Hazardous Tales by Nathan Hale (graphic novelist). Another tale, well-told. The latest in Hale’s popular series of non-fiction is entitled Raid of No Return, and it centers on the first mission by the United States after Pearl Harbor to bomb parts of Japan as WW2 began to escalate.

As with the other books in this series, the story is deep with research and uses the intersections of comic illustrations with text in powerful ways. Here, we learn about the men who were part of the Doolittle Raid, who pushed their aircraft to extremes to strike fear into the hearts of the enemies at the time. This all stems from the attack at Pearl Harbor and the United State’s entry into World War 2.

Actually, much of this story revolves around what happened after the raids on Japan, as the men of Doolittle’s squadron tried to get to safety when their aircrafts ran out of fuel or were shot down over Japan. 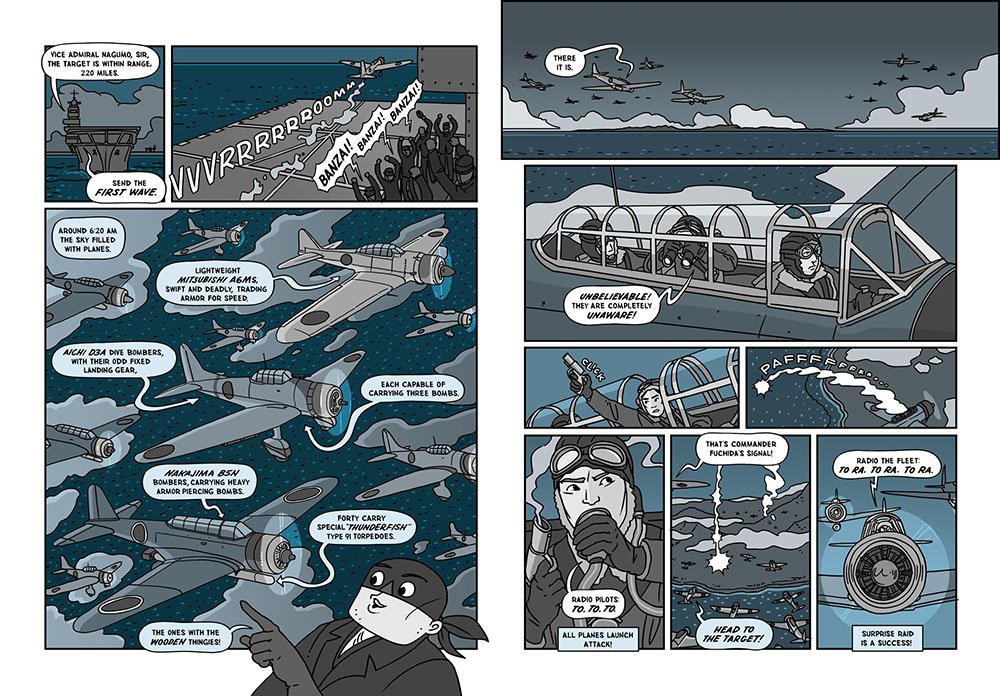 To be fair, this kind of story could be retold from Japan’s side, with a different narrative view. Hale hints at the atrocities of war from both sides. The surprise bombings by the US did kill civilians in Japan, and Japan’s search for the pilots ended up killing  250,0o0 Chinese lives people (some of whom helped shelter the pilots and bring them to safety). I can’t even fathom that kind of destruction of reprisal.

This book would be of interest to middle school and high school readers, although the dense and packed text and pages might make it a difficult read for some students. Hale does not flinch from the horrors of war in this book, but he also celebrates bravery and cunning and survival. The ending, which updates us on the men who survived, is heartbreaking in its emotional punch.

Peace (read it and live it),
Kevin