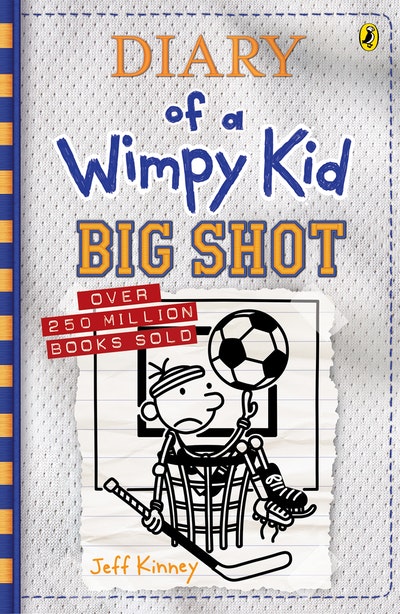 There’s a comforting regularity in the arrival of a new Diary of a Wimpy Kid book each November and sixteen books in (!!) and sixteen years later (!!), I’m still reading Jeff Kinney’s hijinks of his beloved character, Greg Heffley, the ever-lasting middle schooler.

Diary of a Wimpy Kid: Big Shot, the newest in the series, is right on par with the rest of the books — not overly deep in terms of plot and character development, but always packed sky-high with visual jokes and puns, and tons of story guffaws that are always worth my time as a reader.

And since all three of my boys took part in a variety of youth sports — baseball, basketball, track, soccer, etc. — over the years, Kinney’s story arc here about Greg joining a youth basketball club, and all that entails with competition and physical fitness and parents’ expectations, had me laughing, as usual. There’s even the pressure from Greg’s mom to get him involved in anything other than screen time (sounds familiar) and so, basketball, it is.

Not that Greg is any good at it. He’s not, and he knows he’s not, and even as his team heads to a strange tournament, where the team that loses the most games keeps playing in the championship (classic Kinney), you can’t help but root for Greg. Of course, he shoots the basket at the end of the final game, into the wrong net.

I’ve written a review of these books just about every year, as I started them as read aloud when my boys were young. While interest in the books has waned among my sixth graders over time, this year, when I offered my copy of Big Shot to the class, I had a handful of readers, eagerly asking to borrow it.